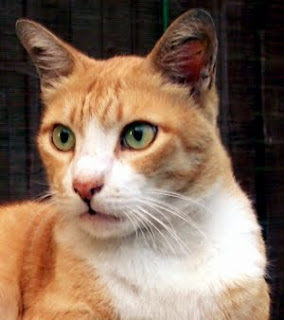 Living in a tropical country like Malaysia means that even tiny cuts tend to fester.

Au had an infected cut (it was tiny!!!) a fortnight ago which became infected.  It retreated with medication. However, last week his lymph nodes were a bit swollen so we suspected lingering infection.  The vet prescribed a shot and a short course of pills.

Because we caught it early, it was no big deal.  The day after his trip to the vet, Au was fine again.  In fact, the pills seem to have stimulated his energy AND his appetite.

He's been racing about, stuffing his face with "rost chikkun" and causing all sorts of trouble.  He trashed the boxes in the utility room, and turned over the laundry basket out of sheer devilry.  And he's asked for extra meals, extra treats and been super cuddly to boot.

Au's pills run out today so we're hoping that everything stays fine.

Here he is, looking handsome - except for his ears which are grubby.  It's not mites or bugs.  It's either ear wax or he's sticking them into the storm drain.  I clean them regularly with a swipe of corn oil.  Au hates the feeling but oil is better than soap.

Anyone else have a cat with grubby ears?

For more cats, check out Gattina's Cats on Tuesday.
Posted by Ellen Whyte at 8:33 AM

Email ThisBlogThis!Share to TwitterShare to FacebookShare to Pinterest
Labels: Au, Cats On Tuesday

Peeve isn't grubby but his white fur sure gets dirty easily. Glad Au is feeling better.

If anyone has grubby ears, momma Ellie licks them clean!

What a little devil! We use the wipes called Ear Cleanse from Dr. Foster's catalog. Maui has the filthiest ears, and his long ear hairs hold it all in.
xx Lounge Kats

I am not sure but Muning had a cut in his ears, and we just leave it like that and it just disappears. Cats I think has their own ways of medicating themselves when they have a wound or something.

No grubby ears but sometimes our
chins get messy from wet cat food.
We notice it most on the white chins
of the girls, Daisy and Nelly! :)

Oh, sorry about that. I hope AU is feeling much better.

When Peanut was a baby his ears were a littl grubby. He has crunchies in his eyes that have to be cleaned everyday. No infection it is what my mama used to call sleepy seeds.

I think I need the same pills as Au takes to run around and turn the house upside down, lol !
Arthur sometimes has grubby ears, but it's more like little black dots, I just scratch them out pretending that I rubb his ears which he loves !

i think all my cats have grubby ears but every single one of them hates having their ears cleaned.. they get really angry and struggle and growl.. they're not scary though. they just look cute when they're mad

Au is fabulous in this portrait, look very CATsome and charming!
Glad to know Au is better now!
purrs and love
Luna - WE LOVE LUNA

We are so glad Au is feeling better and the medicine is working!

I'm glad Au is feeling better, he sure is one handsome ManCat.

Au must be a good pill taker, he is looking mighty fine! Happy COT. :)

He is still a handsome young chap!

My sissy Paris has ear infections a lot. But it's just a cocker thing I guess!

So glad to hear of Au's recovery! All my cats have grubby ears. I clean them once a week using Good Ears solution. I don't know who spread it to the others and I am not keen on isolating my babies for something common like earwax. The vet has checked and said that it is plain grubby ears, no mites present. Take care dear Au and Target!

A swipe of oil is a wonderful idea!! (what a pretty boy!!)

Aw, sorry to hear Au had an infection but glad to hear he's all better. :)

So glad Au is feeling better! What a handsome boy!
Our v-e-t said to use just plain warm water,or a cotton ball with peroxide if we got dirty ears,cuz she said oil makes dirt stick to it. Funny, how all da v-e-t-s haz diffrent idees.

Fanks you fur stoppin' by our bloggie & tellin Jigsaw wot a handsome boy & treat-worthy he is. MOL... We hates to say dis, but da "D" word is in effect at our howse, so we only gits treats 1 day a week! Hisss!!

Trouble's ears are pretty clean. Except for the mealworms of course.

Can you order ear cleansers online there? My favorite one is Epi-Otic Advanced and another one that is good for wax/oil buildup is Cerumene.

Mom's kitty Dandelion used to get mites in her ears! Good boy to take your medicine!

We're glad Au is better after his infection ordeal! We don't have grubby ears but yet we stay inside all the time and clean each other up too.

Oh something happend and we aren't getting the RSS feed of your blog anymore - we thought it was weird we hadn't seen anything lately! We thought mom has been smart and updated the link - she is such a dork sometimes!

We dont' have too many grubby ear problems - Virgil did as a baby but that was earmites. Mom still checks him and he is almost 2 - she is super paranoid.

We are glad that Au's ear got better quickly!!

Hi! Thanks for stopping by and visiting! You asked if any of the kittens are going to bloggers and yes! You follow Pierro and Miles, the orange kitten standing up in the video, is going to be Pierro's new brudder!