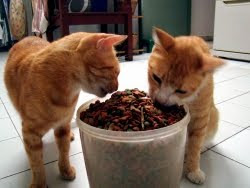 Last week Au showed me he had a small hole in his side that had turned septic.  I took him straight to the vet, and he had a jab.  Luckily the abscess was quite small, so we didn't have it bursting and draining.


Poor old Au though turned out not to like his medicine.  He was terribly ill twenty minutes after taking it.  I went and got him a different lot, and that was OK for one day.  Then that made him ill too.

As his abscess was shrinking nicely, I decided to leave him alone.  I just check on it twenty times a day by "petting" him.  Au knows perfectly well what I'm doing but he lets me fuss.

Today the abscess is almost totally gone.  And Au is feeling his old self again.  When I opened up a new bag of cat biscuits, Target and Au both raced over to eat the first bit from the top of the biscuit barrel.  As Au would say, "It's my favrut!"

more cats, check out Gattina's Cats on Tuesday.
Posted by Ellen Whyte at 9:32 AM

I am glad you are doing okay! I should hate to have issues like that.

poor Au, how did he get it?
Rubs and purrs for him. Hope he is fine and dandy now...

Glad to know Au is doing much better!
Kisses and hugs
Lorenza

Au! You should your medicine, mate! Have you been fighting with a feral cat that you get that abscess? Take care, OK?

Oh no! Poor Au! I am so, so glad to hear that he is much better. I would like to buy him 10 barrels of biscuits so he gets to nibble all the top ones. Pixie is like Au too. He gets very sick if put on antibiotics and is prone to fever after a vaccination. It makes me more protective over him when he is unwell.

Lucky cats! You are allowed to eat direct from the kibble barrel. Glad Au is better.

Glad to know Au is feeling better, he is so adorable!
I'm sending him sweet energies okay!
purrs and love
Luna - We love Luna

It's good that cats sometimes heal themselves without big medication ! So he is back to himself now, if the appetite is there ... :)

We're glad you're feeling better, Au! Sending you many purrs.

P.S. your human is really nice to let you two eat out of the top of the biscuit barrel like that! We never get to do that!

Poor Au! I hope he is feeling lots better now.

I am glad Au is feeling better. Cat biscuits (and mamma love) cure everything lol.

We are so happy that Au is doing better. I am sure that abscess was no fun.
Enjoy eating those biscuits.

Poor Au! I'm glad to hear he's better and so sorry he got so sick.

Poor Au. We are glad his abscess is healing nicely.

Ah, so glad Au is doing better. Yes, the do tend to placate their humans on occasion, don't they?

We're so glad that Au is doing better! Look at that big barrel of foods!

To answer your question, Sadie is an Alaskan Husky. She was rescued from a puppy mill as a puppy so we don't know if she's mixed with anything else but she was bred to be a sled dog.

That is a nice bucket of food! I am glad the abscess is nearly gone!