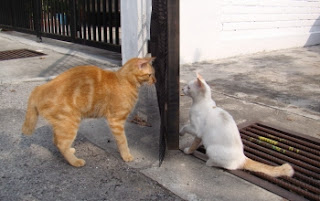 When Target moved in with us, there were several kitties across the street of roughly the same age.  Most have moved on to new homes, but a little girl cat called Snow is now a permanent resident.


Target and Snow played together as kittens, and they are still good friends.  As Snow has a tarmacked drive, she comes over to play in our garden almost every day.

However, yesterday, after Au chased away the orange cat, Target was all uptight.  So much so that when Snow came to say hello, Target jumped a mile and fluffed up.  As Au would say, Target is a fur brain.

For more cats, check out Gattina's Cats on Tuesday.
Posted by Ellen Whyte at 9:44 AM

Email ThisBlogThis!Share to TwitterShare to FacebookShare to Pinterest
Labels: target

I thought most khats were fur brained ;-)

Oh and she is such a petty girl!

We sure hope Target realized his mistake. Snow is a pretty GirlCat and we would LOVE to have her come visit us!

I hope everything will be fine with them!
Kisses and hugs
Lorenza

Some cats are just highly-strung that way! Pixie can be lying down having a good stroking and brushing from us, and then jump up and fluff up like a porcupine as soon as there's a loud noise or sudden movement and remain edgy for the next few hours!

Snow is a really cute girl, Target , you must be too exciting : )

Our hooman wants us to tell your mommy that she enjoys reading about your adventures in the papers. She's just discovered your blog! :)

hrmmm they are on a date???

awww poor snow! but i'm sure she understands :)

I hope Snow wasn't too freaked out!

Hahaha ! what a picture ! and sooo cat !

Target's adrenaline hasn't settled down after a day? Poor Snow!

Poor Target! Kenji sometimes jumps a mile for a silly thing too!

Yep, that tail puffing does that, it messes with the catosterone!!!

Poor little Snow, she must have wondered what she had done wrong. We hope Target has settled down again and said sorry to her.

Poor little Snow - she is a pretty little kitty - we hope you didn't scare her too much Target.

I'm scared of snow myself. The cold and icey kind.

I think Snow is very cute!It's a lovely moment there!
purrs
Luna - WE LOVE LUNA

It's really sweet how Target and Snow have remained friends like that. Everyone has off days. I'm sure they will be friendly and playful again next time.