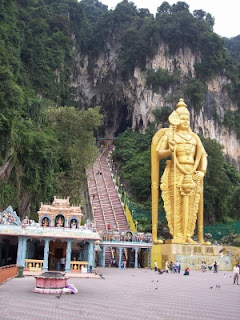 We're getting ready for Deepavali or Diwali, the "festival of lights" that is a major Hindu holiday.  It starts on Friday 5th November. The only problem is that my pals can't agree on what it celebrates.

After we agreed it's about prayers, lighting candles, world peace, and eating mutton curry and other goodies, I was told the origin of the celebration depends on where you are from.

For some the lights are a greeting to Lakshmi, the goddess of wealth. For others it's reverence for the goddess Kali, the death/life goddess with the 8 arms.  A third group say it celebrates the return of King Rama, Queen Sita, and their friends after their epic adventure (as told in the Ramayana) and the start of an era of peace and righteousness. 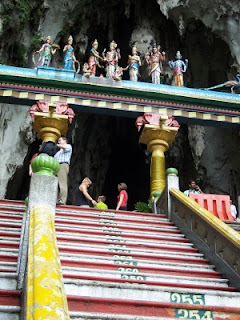 Although everyone argues about the origin, they all agree the holiday goes on for 5 days, and on the 4th day the official New Year starts.  So we'll be handing out ang pow (little gifts of money in colourful envelopes) again. There will also be lots of fireworks.

I'll be celebrating with friends, and curiously it is also a holiday in the UK.  November 5th is Guy Fawkes Day, a holiday that celebrates an attempt in 1605 to blow up parliament and the king.
Fawkes and his Gunpowder Plot failed, but today the event is celebrated with fireworks and the burning of "guys" effigies of the chief conspirator Guy Fawkes.

So it will be fireworks all round I guess. 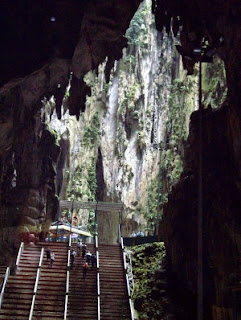 To get into the mood, here are some pictures of Batu Caves, one of the most popular Hindu shrines outside India.  Batu Caves lie just on the other side of Kuala Lumpur, about an hour from my house.

The tall statue is of Lord Murugan, a popular god who appears in many stories, and is usually a war-like character whose magical weapons slay egoes, pride and human waknesses as well as monsters.

To get to the temple inside, you've got to climb 260 or so steps, then enter the cave and climb a few dozen more steps.

This last pic shows the temple inside.  As you can see, it's a MASSIVE cave and has some excellent stalactites.

That is so beautiful!!!

Whatever the origin, it sounds very interesting! Those caves are incredible too!

We learn so much!

Hugz&Khysses,
Khyra and The Golden Khousins

Used to look forward to Deepavali to eat those delicious food.

Very interesting...I love how no-one is sure how the holiday came to be. It must be VERY ancient. I love the statues and shrines...all the colors are fantastic!

This is amazing to know that it locates not far from downtown. Right?
I feel just awesome to think of the people's power to build these cave shrines. Thanks for sharing. Have a nice day!

Deepavali is my favourite time of the year, bumming with my friends and eating ourselves stoopid! I go to Batu Caves quite often, especially now that the SPCA has a neutering programme for all the temple-and-shop dogs. We neuter the dogs, give them tick baths and bring them back and get the shop owners to promise to look after their dogs well. We go back there from time-to-time to check on the dogs and pick up new ones who haven't been neutered (we keep photo records of those that have been fixed). I belong to the 3rd group of devotees. We believe that Deepavali symbolises the defeat of Ravana by Ram and Lakhsman and Hanuman and the gang.

that is a long stair way! if you climb it, I hope you find what you are searching for! Thanks for the interesting info on this holiday :)
Enjoy!

You truly need to visit the limestone caves in Ipoh!

What an interesting post! The pictures are great. I read covert's comment as well. Thanks for sharing this with us. It sounds like such a fun time!

It's precisely 272 steps to reach the insides of Batu Caves. :)