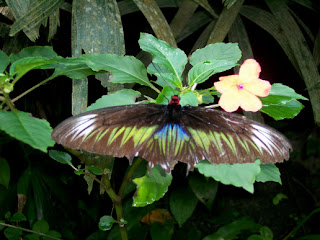 These butterflies are named after a remarkable family, the white Rajas of Sarawak.

The first is the a female Rajah Brooke’s Birdwing; the second is a male.

In 1838 an English gentleman adventurer called James Brooke heard that the Sultanate of Brunei were warring with several Iban tribes in Sarawak.

Brooke went to Sarawak, helped the Sultan and was appointed Raja of Sarawak in 1841. By 1846 Brooke became Rajah permanently. 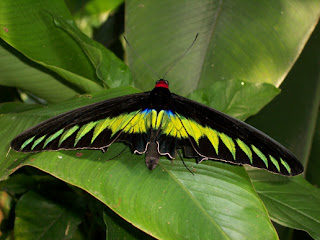 Brooke’s family ruled Sarawak for 3 generations. In September 1941 the third Raja decided Sarawak should be governed by the people in the style of a British democracy. However, that plan was scuppered when the Japanese invaded.

After World War II, Sarawak was ceded to Great Britain. Today it is part of Malaysia.


I took these pics in the KL Butterfly Park.
Posted by Ellen Whyte at 8:20 AM

Wow, those are beautiful butterflies!

Gorgeous butterflies and interesting history! I always like your "fact" posts.
Trish

Those are beautiful! Great pics.

so beautiful!
replying to a comment on my blog:
Raspberry ripple ice-cream--now that IS soulful. takes me back in time. I don't think I've had that for years. Did you see that I posted that it's a beet?

I love the Rajah Brooke Birdwing! I saw lots of them in the wild in Ulu Geroh and Royal Belum. They flock around salt licks! Great photos, Ellen!