Boris Is Not Well 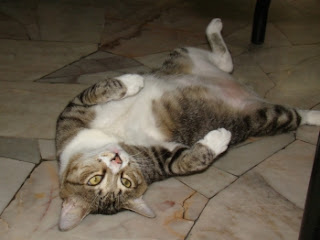 We're worried about Boris.  He has a hairless patch on his backside that hte vet say is contact dermititus - he thinks Boris is allergic to something he's sitting on.

Then on Saturday night Boris seemed to be a bit sore near his tail too.  We took him to the vet yesterday and discovered he had a huge abscess just by his tail.

Now Boris has a fat arse so it's not surprising we missed it.  However, what is surprising is that he showed absolutely no symptoms.

Boris has been playing with us, eating like a pig, and generally behaving as always.  This pic was on Saturday night, you can see he's actually rolling about on the sore spot!

The vet thinks that when the abscess formed, it damaged some nerves which is why he didn't feel it at first.  Luckily we got him to the vet pronto, so we've stopped a minor problem from becoming a major one.

It wasn't easy.  Because Boris wouldn't let us look, he needed a shot of tranquiliser.  Then when we realised how big the hole was, and that it needed stitching, so he had to be put under.  Boris is so fat that he had to be topped up once with anesthetic during the operation.

Boris is now in the spare room, and wearing a lampshade.  The wound by his tail should heal in about a week but we still don't know what's causing the bare patch on his behind.

The vet is hoping it will clear up with the antibiotics he's taking.  If not, I'll take a picture and will ask you for opinions.  In the meantime, please purr for Boris.  He needs it.

PS Tomorrow I'll post a pic of Boris with his lampshade.
Posted by Ellen Whyte at 7:45 AM

Email ThisBlogThis!Share to TwitterShare to FacebookShare to Pinterest
Labels: boris

Poor Boris! I wonder whether the bare patch was due to him licking because he could feel the abscess nearby. We surely hope he recovers completely!

Oh dear Boris! Don't worry...Bobo had an abscess once and it was nothing...(did the vet test it?)

I agree with Simba that maybe the bare patch is due to that...if it is a contact allergy meds should work...maybe it is a food allergy?

I don't think you have anything to worry about other than Boris's severe embarrassment for having to wear the friggin lampshade!

get well soon Boris! (which i have no doubt you will)

Oh you poor poor Boris! It must be painful.

P:S: There's this local gel, gamat (sea cucumber), it works for external wound. Me and my cats have tried it!

Poor Boris, but it does sound like the bare patch could be caused by him licking trying to reach the abscess. We hope it soon heals.

Oh no! We will purr hard for Boris.

Oh get better Boris.
Mom says her lovetiger Caesar the mancat has an abcess like that... he got it from his rabies shot.
Amazing that you are so brave and cheerful with all of that germy ick.
Get better soon and meanwhile, enjoy the extra treats and attention

Boris, we hope you are feeling better soon and the vet and your mom can figure out what's causing your bare patch. Of course we will commence our loud purring for you!

Poor Boris, it sounds like you have not been having any fun. We hope you will heal quickly.

Oh poor Boris! We hope he heals up soon and is going to be okay. We're sending him lots of purrs!

Paws crossed here for Boris!
I hope the meds help to make him get better soon!
Take care
Kisses and hugs
Lorenza

Boris, it must be something in the air. I had an abscess this week too! I feel for ya buddy, and for you it really IS a pain in the bottom!
Me and the rest of the gang are sending your warm soothing purrs.

Poor Boris! He does look like the spot doesn't bother him from the photo. Will purr for his quick (and full) recovery!

Owh poor Boris! I hope the abscess doesnt give him much pain!

Memon has 2 bald patches near the tail, on both right n left sides! But that is how she looks like since we got her.

Poor Boris. I send my best purrs for him.

Thanks for your purrs for Annie...She's actually worse this AM, 24 hours OFF the Clavamox, poor sweetie.

My sisters and I are all sending great big purrs to you sweet Boris. Get better soon please!

Poor Boris, I hope you are feeling better soon!

My pain in the butt - Kozmo has an allergy and he has an abcess in his ear. The vet said cats gets them on their faces and near their tails. Kozmo's from kitty crunchies!
We hopes Boris gets better soon!
Nellie (CatFromHell)

Sending lots of purrs for Boris - god thing you caught this sore now and not later.

Awww...love this picture of Boris. I hope his wound and infection heal very, very soon!

Oh Boris, precious furbaby. My mommy and I both will work furry hard to make you all better.

Many kitty kissies from me and lots of love from mommy. Please get better soon and I had a bare spot too on my lower tummy area close to where the apex of my legs and the vet said it was from my allergies and I had yet another shot for the allergies. My furs grew back.

Poor sweet Boris! We hope you are feeling better. It sounds as though it might be very painful. I hope that nasty abscess heals quickly.

We're purring and praying that the antibiotics work. Get better soon, Boris!

My worry is that allergies might recur. Please get well soon, Boris darling. I do so love hugging you, you are a very friendly and good-natured mancat. Let me know how it goes, Ellen.