Living In Malaysia: Christmas and New Year in Malaysia

Katnip Lounge asked us to blog a bit about Christmas and New Year in Malaysia, so here goes!

I'm not religious so I can only comment on public events.  The shopping malls start Christmas decorations in mid to end November.  Mind you, I heard the first Christmas carols played in September this year but that was probably because the people in charge of the music liked the tunes but couldn't understand the words! 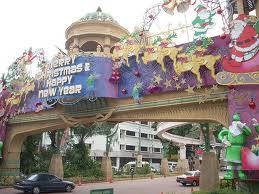 Although we're on the equator, the malls usually put up trees, reindeer and santas.   The pic was taken outside Sunway Pyramid shopping centre.

This year I saw lots of toy displays with a few santas sprinkled over the top.  I suspect this is to entice non-Christians into buying toys for their kids.

In Malaysia about half the population is Muslim and the rest are Christian, Buddhist, Taoist, Skih, Hindu, animist and other religions, so we're a pretty mixed bunch.

A few years ago (2002?  2003?) some fanatical people complained they were offended by public Christmas decorations.   However, when senior politicos pointed out that Christmas is vital for retailers, and that many Malaysians are Christian, these complaints vanished from public view.

This year there wasn't a peep about it here but the disease of intolerance is alive and well in Indonesia where a similar bunch of people tried the same thing in Jakarta.

My friends who are a very mixed bunch all bitch and moan about these fanatics because it damages community relations.  We've no idea where this type of sentiment comes from, but we suspect influence from Africa, the Middle East and the Indian continent where extremism is rife.

A report in the newspaper this week said the police arrested over 100 people they suspect of spreading extremist/jihad sentiments.  Hopefully they'll get kicked out out the country, and leave us to live together in peace.

Unlike Christmas, everyone celebrates New Year, or Gregorian New Year as it should be called.  There are street parties, mall parties, fireworks, and a public count down.  The streets are blocked with traffic and people spend hours getting to and from events.

We stay at home and watch the fireworks from upstairs.  As we can see two malls and a big stadium, we have primo seats!  We'll have a glass of champagne, and the cats will have ham, but for us the best New Year is Chinese New Year.  I'll write about that in a month or so when the Year of the Rabbit starts.

Happy New Year!  May 2011 bring you health, happiness, success and lots of treats!

Thank you for a neat post; it's always fun to read about other people's celebrations. But it seems that it's much the same for you as it is for us in North America, at least re: the commercialism of the season. Though stores in our area had Christmas stuff out before Halloween this year. Ridiculous!

A very happy New Year to you all! We hope 2011 brings an abundance of laughter, good health, love and success.

P.S. Our mom never was big on "new year's." For her, the new year starts in Spring, with the Earth's rebirth, so all the fuss about January 1st doesn't get her excited at all. LOL.

I loved reading what it's like where you are. A bit different than my unlearned expectations had imaged.

Please tell Au and Target that mommy bought me some baby food ham meat! Because I need to be tempted to eat. I can't wait to try it.

Happy New Year and thank you for the good wishes for me. Mommy was scared really badly till this afternoon. I hope I am on an upswing,

It's always so interesting to hear about traditions in other parts of the world. We'll be staying in tonight too and our neighbors always shoot off fireworks that scare us. We hope all of you have a Happy New Year!

Thanks for posting this! We love that we have furriends all over the world and we can learn about where you live.

Great post - just curious - are you native to your country or have moved there. It looks so beautiful and lush. Happy New Year to Target, Mom and Au.

Thanks for sharing that!

Like the others, I enjoy reading about the other cultures take on 'things'

To me, simply, religion is about peace-loving.

Can't say much or Mr. ISA will knock on my door. (hahaha!)

Happy New Year! Thanks for the post! I sure wish the USA would "man up" and kick out extremists, too. And then we could all live peacefully ...LOL!

We're visiting all our friends today..we must fly!

Happy New Year
♥
The Creek Cats and Maggie May

This was so interesting, Mommy is an armchair traveller because of us furry kids and she thought it was great! Thank yous for sharing!
Nellie
PS For New Year, me is moving my blog to blogger. Me will keep them both going for a while.
my new home is
thecatfromhell(dot)blogspot(dot)com

Great post, Ellen! The best part (and silliest!) about celebrating Christmas in Malaysia is seeing all those Malay-Muslim youngsters go about wth Santa hats worn on top of their tudung (headscarves), ha ha! At least they are smart enough to know that there is no religious symbolism in Santa hats. You are right -- why are there so many Toyland-themed Christmas displays this year? Ikano, the Curve, Sunway Pyramid... All seemed to have a toyland theme.