Au Is Eating And There May Be More Good News... 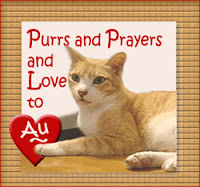 Au has been eating steadily since Friday.  He eats a spoonful of food every 2 to 3 hours.  He's still so weak that when he tries to scratch his ear with his paw he falls over.  But he's eating, so I am hopeful - again!

Everyone has been so kind.  Ann from Zoolatry made this badge to ask you all to purr for Au and KC from the Cat Blogosphere put it up so you could all see it but I was so freaked by Au being sick I didn't even notice.  THANKS!  Also for the email and comments with advice.  Quite apart from the support, I've learned a lot from all of you.


Going to the pub on Friday was also great as I got some good advice from a friend who has a liver problem.  He told me that his sense of smell and taste disappeared, that his tongue felt metallic, and that only sweet things had any sort of appeal.  He advised looking for a sweet jelly food to appeal to Au.

Au has been ignoring all cat foods except for SmartHeart so I went home and had a taste: it's sweetier than his regular Snappy Tom and the Fussy Cat and Fancy Feast that we've opened recently.

Tanks Bobbi; if this happens to anyone else, this tip is really useful.

I also heard of some special trials for a new medicine.  It's all rather hush-hush so I can't tell you at the moment what it's about.  However, it is possible that Au may be testing a new thing

As Au is still very weak, we went for another blood test and spoke to the vet.  The test results and a follow-up chat with the vet will take place at lunchtime today.  Au will Tweet about it and I'll blog tomorrow.  Paws crossed all is well.
Posted by Ellen Whyte at 10:16 AM

Email ThisBlogThis!Share to TwitterShare to FacebookShare to Pinterest
Labels: Au

That is true that illness can make things taste funny--perhaps that is part of his issue. Good luck and we are glad to hear he is eating some!!!

We are keeping the prayers going for Au and we hope he keeps eating, regains his strength and will soon be on the road to recovery. Hugs and nose kisses

We are so glad to hear that Au has been eating, and are purring and praying real hard! That trial sounds intriguing ... please keep us posted.

That is so purry interesting and pawesome too!

Paws Cross for you, Au
Keep up good work !!!
You are doing good : )
xxxx
Plus Purrs
Puddy

Big huge purrs coming Au's way from all of us! Poor guy, tipping over when he scratches...Mommy just wants to hold him and pet him and kiss him. (YUK, Mommy!)
VERY interesting about the sweet factor, as Cat's aren't supposed to be able to taste sweet. Which we think is TOTAL hooey...we love sweets!

So glad that Au is feeling better. Hope his tests are OK. crossed paws for good news tomorrow!

We're so glad to hear that Au is eating and we are still purring that he continues to gain strength and eat more!

Glad Au is eating at least a little bit.
Sure Bobbi gave you a good advice.
Paws crossed everything goes well at the Vet!
Take care
Kisses and hugs
Lorenza

We're hopeful Au will continue to eat and pick up strength. Purrs and tail wags.

Oh we're so happy that Au is eating more!! We'll keep purring that he continues to do so!!

We're purring that Au gets stronger every time he eats a bit.

Keeping Au in my prayers, glad he is coming along and is eating again, keep it up Au! Wishing him a speedy recovery!

I hope you are feeling much better and hope that you were just putting up a fuss so that your mommy will pay MORE attention to you..:o)

I got no paws but hands, so I will pray for you instead of purrs....

Mommy cat,please be strong ya..

We are so happy to hear positive things about Au, and hope that there will be good news about the new medicine and his bllod work. Purrs, Au!!

It's so great to hear that Au is eating. Me and Charlie hope that the sweeter food will work too. We are sending lots and lots of hugs and purrs and healing prayers!! We hope Au is on the road to recovery. Good luck with the vet's results!!! Take care
x

Shedding tears of relief and praying hard for Au. This has been such a stressful time for us. Au is on my mind all the time but I didn't want to bug you with hourly messages and phone calls.

We're continuing to send purrs and purrayers that Au will be well. (((Hugs))) to you from our mom.

That is good news that Au is eating a bit now. Little and often is good.We hope the trial medicine will work well for him. We are keeping our purrs going for him.

We are purring and praying for precious Au to get stronger and feel better everyday; best of luck with the vet chat today...We hope you all enjoy a wonderful, blessed week ahead with Au's continued recovery, sweet friends...xoxo...J, Calle, Halle, Sukki

We've got all paws crossed and all purrs on loud for you sweet Au!!!

glad to hear that Au has been eating well. i'll continue to pray for him. best wishes.

Way to go Au! Keep up, we're still praying for you.

We are all SOOOO happy that Au is eating and able to be a trailblazer by trying out a new drug. How wonderful! We'll keep purring and praying that everything works perfectly.

We've got all our paws crossed and I've even crossed my eyes AND we are purring lots and lots for Au. We hope the sweet idea works and that this top secret test also helps. Eat, Au! Eat!! We're right with you in all you do. Purrs, Lautrec, Tiny and TheDawg

AU, get well soon! I'd like to hear you tweet more often. You're the Hero.Take care and eat well.

We are so glad Au is eating that is wonderful news.

Maybe he would like some mashed bananas as they are kinda sweet.

Au, I won't let go of you, sweet boy. Try to eat, and let mommy assist you since you need that. You can still show the tayle of disapproval but you need to eat!

Love and kissies, sweet baby boy. Mommy and I send our love. xoxo

Hoping for some good news. Ellen, you are an amazing caretaker for your kitties, you really stop at nothing to help them. I hope you are taking care of yourself as well. We'll keep purring!

Oh, I am looking forward to hearing the outcome of Au's blood test. I'm so glad that he's eating! Gain back that strength, sweet Au!

Sending healing purrrrrss to Au. Hang in there, kittie.

It might be worth mixing a little powered sugar into Au's Stinky Goodness, if you have it. If nothing else, it would be a few more calories for him.

And we're with the Katnip Lounge. Luna for sure has a sweet tooth, and the Pirates usually check out any cookies the Food Source snack on.

I am purring realy loud that the news from the vet is good, come on my friend you can do it.. Hugs GJ xx

glad you are eating better Au! ask DR. vet is cats can eat honey or raw sugar? and add a bit to his food to sweeten it up. what I have heard is that dogs eat by sense of smell ( why they will eat almost anything) & cats by sense of taste & will starve them selves if it doesn't taste & smell good. purrs & skritches.

Au you are such a brave boy and we are all proud of you. We hope that you continue to eat little meals and build your strength back up. We are all purring for you my friend.

I know it must be so hard having to go through so many ups and downs with Au.
I am glad he is eating again. I really hope the vet appt. goes good today.
Bless his heart. He is so pretty I wish I could hold and snuggle him.
We will keep praying for his recovery.
Purrs
and Hugs