Changes - Just Wait For The Drama

Au is well.  He had 4ths at dinner last night, and played with T-man for an hour.  The thing is, Au plays almost exclusively with T-man and our little Target is bored.

It's been this way for 7 months now, so we've decided to make some changes.  We're adopting a new cat.

As Au is FIV positive, this took some planning.  We needed a cat who is very healthy.  So we looked for one that's been inoculated, dewormed, and treated for fleas.

Also, Au hates tiny kittens but he doesn't mind young cats.  As a big adult cat may be territorial asnd bully our shy Target, we looked for a compromise and settled on a young cat aged around 4 months. 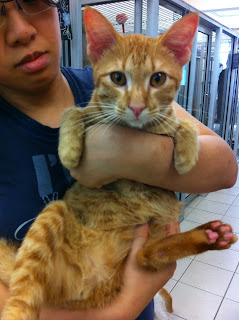 As Target needs a playmate, we wanted a feisty kitten.

T-man said he preferred a boy as they tend to be tougher than girl cats and he thinks Target needs some shoring up in his confidence department.  T-man also wanted a Malaysian kinky tailed cat if possible.

Alicia from Pet Epicure came up with 2 cats.  T-man got the choice and he settled on Jake.

Just to be sure, we paid for an FIV test and when he was proved negative, we paid for the FIV shot. This will be added to Jake's adoption fee.

We're picking Jake up in an hour.  We fully expect Target to be horribly jealous at first, so watch this space for drama.  I'll provide daily updates and no doubt Au will Tweet about it.
Posted by Ellen Whyte at 8:40 AM

Email ThisBlogThis!Share to TwitterShare to FacebookShare to Pinterest
Labels: Jake

Wishing all the best for you all. Glad to hear that Au is doing well. Hope Jake settles right in and everyone falls in love with him right off. Can't wait to read future posts and see how things are going. Hugs and nose kisses

Wow a new brother, hopes they will all be well eventually.

Cool! I am looking forward to updates!

That is exciting. Never having had a cat, we are curious as to how you introduce a new cat. Do you keep them apart for a while, in separate rooms? Hope all goes very well for you.

Glad Au is still eating, esp after his distraught message about his servunts taking a vacation! I sure hope the the new little guy ( who looks big already) will be a great buddy fur Target. At least Target will get in lots of romps & tussles fur awhile ") just remind dem kitties to keep the claws inside da paws!

all the best with your new brother

Sure you are going to have interesting times ahead!
I hope everything goes well!
Take care
Kisses and hugs
Lorenza

I'm just smiling. Yay! looking forward to both the drama and the new adventures. (jake looks like a sweetheart!)

Wow, very cool! Congratulations! We are glad Au is eating well and we can't wait for all the updates, maybe there won't be too much drama...well we can hope cant' we? Jake is a cutie!

We are so glad Au got the good report and is well! Yea!!! We gonna keep him in our purrs. And hello to Jake! This is so exciting! We will fur sure be checking back, and looking for those tweets! We just know you alls gonna bee happy!
=^~^=

How exciting! It's wonderful you're getting a new member of your family! Jake is a cutie and we hope all goes well!

You got Jake!! :) And I'm seeing triples, instead of doubles. Is the colour a coincidence or is there a preference for ginger cats? :))

Oh my gosh, he is just adorable..congrats!! I hope everyone ends up getting along!

Oh what wonderful news about Jake! Au is gonna love having a little playmate. Smoochies.

Welcome dear Jake and purrs and love to Au and Target, so nice that Au is feeling better!
Mammy Ellen is adorable Jake, you are a lucky friend!
purrs and love to you all
Luna - WE LOVE LUNA and hugs from mommy Léia

is dat Jake in the pic..he seems fun..looks like d "orange colony" is growing :)

glad Au is feeling better. awww, Jake is such a cutie pie. hope everyone will get along well.

You are ONE BRAVE WOMAN. The last time I did something like that, the Rowdies peed on my things to let me know how displeased they are.

OMC, Rumblemum may NEVER stop squeeing about how cute he is... good luck my friends, I know how those little brothers can be...

Wow! Cat family dynamics sure are complicated. I hope everybody gets what they need and has a pal to hang with once things are sorted out.

Let's get this PAWty started!

That is wonderful, welcome home Jake, we can't wait to learn more about you!

What a sweetie! How nice you are adding a new family member! I'm sure after some settling in, everyone will adjust fine. Takes time. I know I have finally adjusted to the third dog my son brought home, LOL! :)

Looking forward to reading about their adventures!

Welcome Jake!!!! We hope everyone will be fast friends :-)

Yay! A new kitten!!!! Ginger especially will be watching this space as she lives for drama.

Jake looks adorable. Hope the transition goes better than it has at my house lol.

Oh, how exciting. We hope everything goes well and Target bonds with Jake.

hello au and target its dennis the vizsla dog hay wow a noo kitty!!! ummmmmmm that is grate!!! yoo hav mayd shoor he is not sum sort of eevil jeenyus like my sister trouble the kitty rite??? wel he luks kind of sweet and innosent enuf and he is pritty yung so hopefully yoo can keep him on the strait and narro!!! ha ha ok bye

Oooh cutie Jake! And I'm glad Au is getting better! Ahh I missed these kitties!

oooooh, how acitin'! li'l Jake looks like he's gonna be great new brofur-- we sends purrs of welcome, and love an' best fishes to you all!

Oh wow. This is so exciting! We hope all goes well with the new one. Keep us posted.

We are excited about Jake coming. Hopefully everyone else will like the idea. It may take awhile but I bet they all end up being best buddies. We have been reading about the new treatment for Au and just think that is awesome and it is about time we got our butts over here. Take care.

We are 'AU' so glad that Au is doing well...AND that he is going to have a new buddy!!! We are so excited to hear all about Jake and how he gets along with everyone...he is really cute...there's going to be fun in your house for sure!!! Dad was just saying that we should get a 'buddy' for Ellwood...a FELINE buddy, but Mom thinks not...she insists that she will only have as many cats as she has hands so that she knows she can pet all her cats at the same time (I guess she pets Ellwood with her feets!!). Keep up the good appetite Au and don't let Target and the new kid worry you...you are still the best!! Purrs, Lautrec and Tiny and DawgWood

This is such exciting news! ConCATulations on the new addition to your family. Jake is quite cute and handsome. :)

We hope the introduction and transition go smoothly, and will watch for your updates with great anticipation!

congratulations to the new addition to your family.

Wow!! Congrats and I hope the drama is kept to a minimum but at least you're prepared!

There is nothing like introducing a new cat into a cat-filled household - it's as unique an experience as you can get!!

we think that is a big undertaking and there is sure to be drama as a result. You have clearly thought it through though so here is keeping everything cvrossed that it works out. You certainly chose a beauty! We look forward to seeing more of him. Love Helen, Darcy and Bingley xx

I love Orange boys and Jake looks like a purrfect fit for the family. So looking forward to seeing the introduction of him to his brothers.
That is great that Au continues to do well with his treatment purring for positive healing light.

So exciting! Concatulations on your new addition!

Oh I think we are in for some fun in the next few months while we see the little one settle in. Looking forward to it.. Hugs GJ xx

Au and Target, we think your world is about to be ROCKED! In a good way.

Best wishes that all the cat´s will get along and that Target like his new playmate :)

Jake is handsome. We look forward to reading updates about him.

Yoo hoo Hi there Jake!
You are so handsome and now you've found your forever and ever home! We are so happy for you and look forward to getting to know you.
purrs
>^,,^<
♥Abby♥

Great news - lucky Jake to come live with you guys. It may be a bit unsettling in the beginning for Au and target but we know they will be fine with a new man in the house. I think this will be good for Target.