Mummy Cat's Beetle is back.  It's a squillion years old just like her but it's all new and shiny.

We got an award from Whisppy called Premio Destellos Brillantes en el Cielo Azul (Bright Flashes in the Blue Sky Award) where we have to describe what we dream or wish for most in the world. 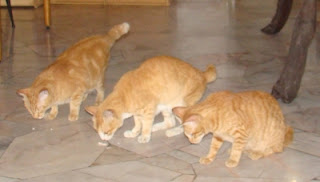 Here they are, Target, Au and Guido, all lined up and being hand-fed chicken.  Luxury.

Thanks Cathy for the award.  We've been asked to pass it on to 5 people.  As the cats we know have mostly been nominated, we're pawing it forward to our dog pals:

Scoop passed away 4 years ago today.  We still think of our old fuzzy; in fact, we were just talking about him two days ago, boasting about his amazing hunting prowess.

Scoop was a real ratter.  In Kuching he killed cane rats with bodies longer than a dust-pan.  In Malacca he was death on paws to the huge river rats that tried to come into our house. 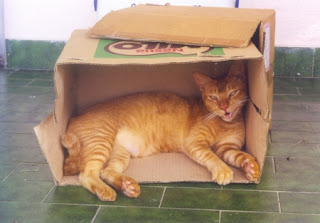 But his greatest triumph was in Kajang where he and his junior officer Au herded a monitor lizard into the house, and finally cornered him in the bedroom.

Au was already having doubts but it was at this point Scoop realised that he was a 4 kilo kitty and that his quarry was over a meter long and at least 4 times his weight.

It was the only time that Scoop was relieved when I tapped him on the shoulder and asked him to "leave the poor thing alone."

The lizard left through the window, and Scoop and Au settled down for a celebratory lunch and lots of praise.

Scoop was a wonderful cat and we miss him dearly.
Posted by Ellen Whyte at 8:46 AM 40 comments

What cats do when their slaves are off to earn cat biscuits and roast chicken..... 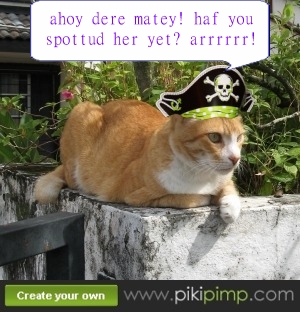 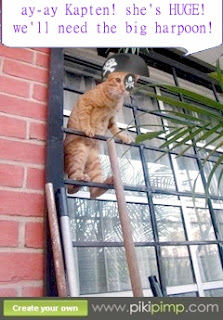 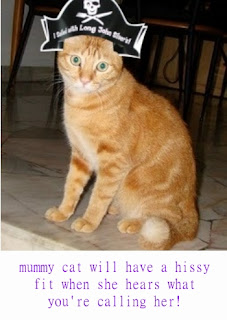 Target: Guido Is After My MC 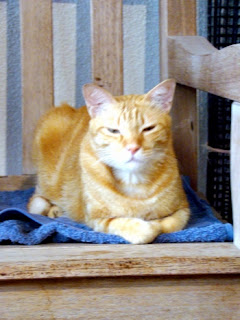 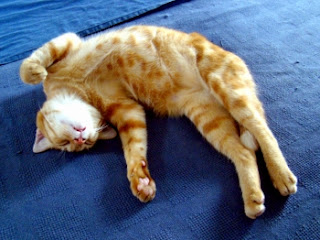 You can see by this picture that I'm not convinced.  See my Don Corleone look?  It just screams suspicion.

I share my food, my rug, my sofa with Guido, and I take him for walks, but I suspect he's after something more: my mummy cat!

Last night Guido was in bed, lying up against her and CUDDLING her.  I was on my pillow so I quickly put my paws around her.  Then she petted me!

But I'm thinking, she petted me with one hand.  So what was the other hand doing?

I suspect the worst.  So I am being super cute.

Look at this.  Could you resist this tummy?
Posted by Ellen Whyte at 8:55 AM 31 comments

We Are No More Living In A House Of Lazarus 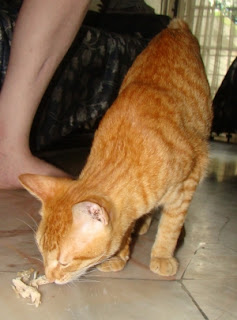 People, it's good news all round.

Target had a tiny sniffle of cat flue a few weeks ago and recovered in seconds thanks to being up to date on his inoculations.

Then Au got it and being FIV positive was a zombie cat.  Having been given extra vitamins for a week, Au is now fine again.  He has zombie eyes for ten minutes after he wakens up, and then they clear.  His appetite has been excellent, and I'm happy to say he's putting on weight.

In fact, Au is looking better all over.  His fur is sleeker, and that horrible stegosaurus feel along his spine is lessening too.

I know he's better because he's stuffing his face all day, and not wakening me up at 1AM and 4AM anymore.  Yes, I am now allowed to sleep until 5AM undisturbed! 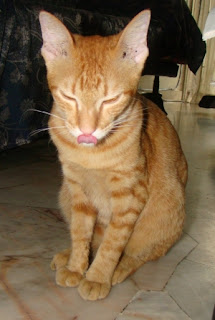 Guido was fine in principle during this time, but he had a dicky tummy.  When we got him, we were warned he didn't do well on cat biscuits and that he had a sensitive tummy.

Trying this, that and the other thing, we eliminated various foods as the potential problem.  Guido was fine but he had pudding-poop which worried me.

We finally tried him on RetroMAD1.  If the pudding poop was caused by a background virus, that would sort it.  Plus, it wouldn't do him any harm.  And, other methods hadn't worked.

A drop of 1.4ml a day and after 3 days we had solid poop in the litter box.  Guido now eats less which is a great sign as he must be absorbing all the nutrients from his food. The pics are of him eating chicken.

As I said, good news all round.  Hope you all have a great day too!

We have a fan page on Facebook! http://www.facebook.com/KatzTales A one stop centre for Au's tweets, quick updates and photos. Come like us?
Posted by Ellen Whyte at 9:47 AM 37 comments

Guido is settling in nicely. Here he is having breakfast with Au, and cuddling with Target. 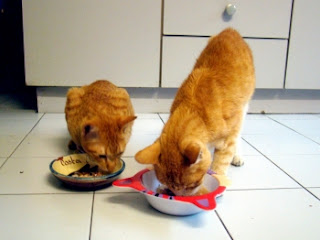 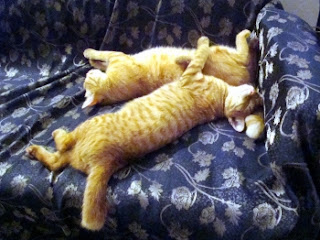 Also, who said there's too many cats online? The CHEEK of it! 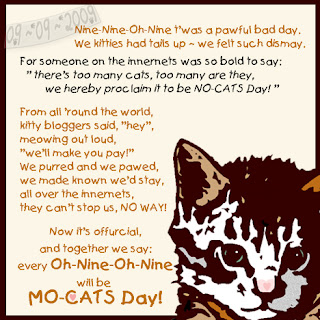 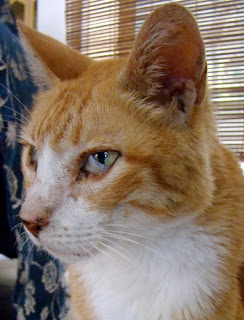 Au still has a touch of cat flue so his "third eyelid" is up.  I'm calling him Zombie Cat, and I think he likes it.

Au is eating well: breakfast was cat biscuits followed by roast chicken breast and then a bit of ham and a tablespoon of sardine cat food.

However, he is breathing a little heavily.  If he still is tomorrow, he's back to the vet.

I'm paranoid about Au's health and the little furry tyke knows it.  Yesterday he had me up and down the stairs 10 times just for the fun of it.  But he gave me furry purry headbutts in the office after AND sat on my desk and purred at me.

So I guess that's OK.

To see more of Au, Target and Guido visit our Katz Tales facebook page...
Posted by Ellen Whyte at 8:47 AM 40 comments

Au Speaks Out: Labour Of Love

i know you haf been missing my words of wisdom so i haf grashushly agreed to blog today.

also, de survunt is a bit lazy today.  she's moaning bekos i get her up twice a night to feed me.  i tell her, dat's wot survunts are for!  but she still moans abowt being tired.  it keeps me awake when i'm trying to nap. 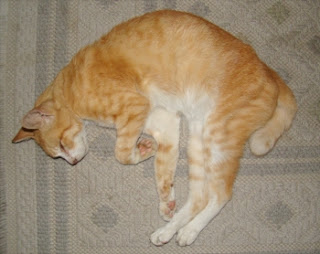 i am furry well.  de vet said so when de survunt dragged me off to see him just becos i was a bit under de weather.  i haf put on a bit of weight (see me on my rug!) and my liver is almost purrfekt again.  i just haf a touch of sumthing so i get ekstra vitamins.  i am 13 and a half years old you know, so it's only to be ekspekted.


dis weekend i plan to be a party kat.


first dere's a birthday and gotcha day party on at Momo's.  efurry comment means money for kats who don't haf survunts.  you should go and komment.de invitashun is here for you to use. 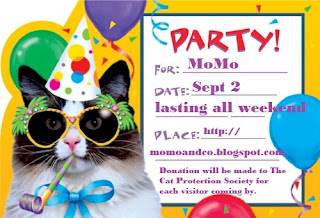 and den i'm going to visit ML who runs de kat blogosphere.  ML is not lazy, she wurks hard to promote kats.  she is an eksampul to my survunt.  so i shall go ovur and give her a furry purry headbutt on de ankul.  dat's an honour, you know.

if you want to see more of me, you kan see us on our Katz Tales facebook page...  and i am also in de newspapur today.  in The Star, de malaysian newspapur.  de survunt writes it and it's all abowt me.

meow and see you at de kat blogosphere!
Posted by Ellen Whyte at 11:54 AM 22 comments