If you're on Facebook you will have seen that I picked up a Malayan Box Turtle on a busy road on (Malaysia) National Day two weeks ago.  We've called him Soup, because that is often the fate of these animals. 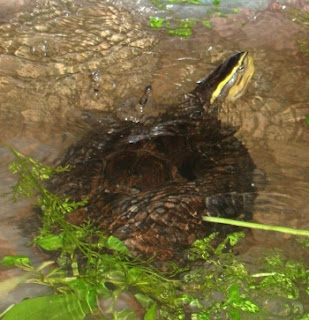 Soup is a Cites II turtle so he needs to be breeding somewhere.  The national zoo, Zoo Negara, want him for their breeding programme.  However, there's a tonne of red tape to be fixed with the Wildlife Department.

So while we do that, Soup is in our house, swimming in the little pond we made for him.  Au ignores him, Guido loves him, and Target is terrified of him.

Soup will also be featured in my newspaper writing.  I plan to use him for feature stories showing people why it's not good practice to buy exotic pets, or to release animals for "merit" as part of religious ceremonies.

I'll try and get some better pics up soon but work is crazy at the moment so it may take a few days.

PS UPDATE: red tape solved and an even better solution for Soup.  Will Tell All on Wednesday...
Posted by Ellen Whyte at 7:38 AM

Email ThisBlogThis!Share to TwitterShare to FacebookShare to Pinterest
Labels: soup

Glad you saved him - and that he can make more babies turtles and help you educate people. We love that the cats have such different reactions to him. :)

That was a darn good save, hooray!!!

Yes, it is interesting the felines have differing reactions to him; it shows their individuality.

Welcome, Soup. If you search our blog, you will see that Thunder made friends with a turtle on one of our walks - Tony theTurtle. He is wondering if Soup might be his cousin:)

Good luck with your new pet.

Soup is having a great time in your house

So happy for Soup! Wish you could bring home a few more box turtles in need of good homes and dig them a pond and let them keep each other company. It wouldn't be right, but I wouldn't suffer so much separation anxiety if I know he's going to be with you for good.

Glad you saved the little guy. And it's great the red tape is all taken care of. Interesting kitty reactions!

Glad the red tape is sorted, and kudos to you for rescuing him. Cats are so strange in their reactions to things!

He was lucky to be saved by you !! Some people are really crazy. They don't think. I wonder what Arthur would do with a turtle. He met already a hedgehog and ate with him in the same plate !

Hooray for Soup ! I can't wait to see how you all react with him while he is with you guys, Pretty interesting !
If he is with me, I wanna have a ride ..tee..hee..May be take me to da food bowl : )

Au, Target & Guido,
Remember, Soup is not catfood, OK? We love that mom saved him from some people's soup pot. Mama was on a student exchange program to Japan many many years ago. One morning, she was served grilled turtle meat for breakfast. Mama puked in front of her host. har har har...served them right! purrr...meow!

Awwwww Soup is BEAUTIFUL!! He's lovely!! Yay for rescuing him and double YAY for overcoming the paperwork to get him in the breeding programme! Hooorah!!! He truly is a star!

Well done! Soup sure is lucky to have been rescued by you.

So glad you saved him and he looks a cute guy. Mum likes to watcch the turtles in a local place to us. Hugs GJ xx

How interesting about Soup! We are curious about what the new, better solution is that you hve found for him!

Oh good news that Soup will have a good outcome. Love all the reactions from the kitties. It is so interested how all of them have different reactions. Can't wait to see more pictures. It looks like he is pretty big. Thanks for the story.

Soup is sure lucky to have found you!!

Soup is very lucky that he was rescued by you, and didn't end up as soup! Good luck sorting out all the bureaucratic red tape.

Thank goodness you were able to save him - we love his name although we don't know if we would like the taste of turtle soup!
We laughed at your cats reactions to him.
Luv Hannah and Lucy xx xx

Oh thank you for saving him. My mom is fond of turtles as a species and has stopped and gotten out of her car many times to assist one across the road. xoxoxoxo

Soup is adorable, so nice that you are taking care of him!We love turtles, my mammy has a turtle friend when she was a kid in a farm in Brazil.Good memories!
They are adorable critters!
purrs
Luna - WE LOVE LUNA

Soup will make a nice addition to the family! It's so funny how each of the cats reacted differently to his appearance on the scene. :D

I'm glad a solution was found for soup (besides edible soup!)

Soup was lucky you found him. You brought up a subject we're not familiar with - releasing animals as part of a religious ceremony.

We are so glad that you saved him from the soup pot! I wonder how my cats would react. Peanut would probably ignore and Marshmellow would try to eat I think.

oooh so this is soup!hahaha his name reminded me of the mock turtle soup!so funny hw some of ur cats are afraid of him..what does he eats?lettuce?

Can't wait to see what Soup's new fate will be!