We Callously Abandon Our Cats 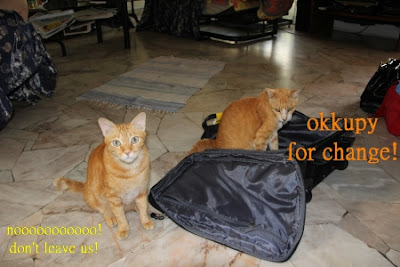 T-man and I went to Thailand for 3 days last week.  When we brought out our case, Target and Au knew what was up.

While we were away, our neighbours Lillian and Umi looked in on the cats twice a day.  In addition, the lady who comes to clean also came for one morning and one afternoon.  Despite this, the cats clearly felt neglected.

I got an SMS on the 3rd day to say that Target had disappeared.  About 5 minutes later and after several heart attacks, I was informed that Target had turned up.  I'm convinced the little beggar (and I may be a vowel or two out when I say that) deliberately staged a panic scenario.

We had a long flight and had a taxi driver from hell on the way home so when we finally dropped through the door at 130AM it was nice to be greeted with enthusiasm. 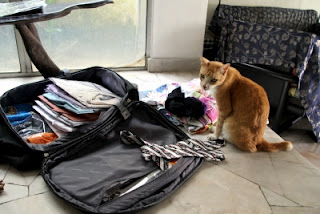 Guido dived over to see us purring and shouting MEOW! MEOW!

Target came tumbling down the stairs, threw himself into my arms, and purred loudly.  From the way his fur was standing up on his head, he'd been fast asleep.

Au was ensconced in my office chair and deep in sleep, but when I looked in on him, he woke up and demanded I carry him downstairs.  The meow he gave "his" survunt De Male was something to hear. 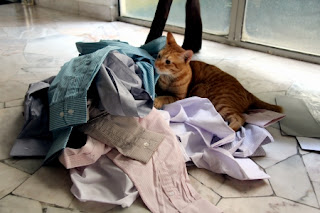 The next morning the cats inspected our case, the new shirts T-man bought, and decided that we have to be prevented from escaping again.  They're following us about 24/7and covering the laundry with fur so that all the other cats we may meet know we're also in service.

I'm quite pleased: this is one trip where we are not punished with the Tayul of Displeashure when we return!
Posted by Ellen Whyte at 3:28 PM

I'd check your suitcases before you leave the house again! Deccy x

kats n other tales: the rule they house !! kats for house domination!!

You friends are great inspectors, lots of work to do there! :)
purrs
Luna - WE LOVE LUNA

None of mine has ever given me the back of disrespect when I've been gone...though I really don't go anywhere now. Used to more with Chum and Annie, though -- had a great neighbour who looked after them, but she's long moved out.

Anyway, it's nice to travel, but it's always better to be home!

Awwww Target, Au and Guido!! You are all so happy to have mum and dad back again!! Yay!! We hope they have lots of treats and pressies for you all!

Little friends I have missed your travel were!!!????
Tenhum a sortei on my blog and I want to take, not enventem excuses???? '
"I am celebrating 500 followers with a special event ... a photo competition. You should submit a photo of a part of your body - that's why it is called "esconde esconde' (hide). I would like to have you in this competition a as a friend of my blog. I'll wait for your visit

Rules
1- take a photo of your animal but only a part of it (where he cannot be fully disclosed)
2- everybody can apply
3- place a stamp of this competition on your blog and promote it
4- be a follower of this blog
5- deadline is February 29
6- as soon as you send me your photo by e-mail I'll post them on the blog
7- Voting: each person can vote on one photo only, not its own and has to be a follower of the blog. You can ask your friends to vote for you.
8-premio can't say still Has what is therefore depends on the little friend to win
9-there are two winners, one will be chosen by me (hopefully not me meter in a large trap of having to choose one….) the other winner will you choose
Turrinhas the
Kika♥♥♥

You got such a nice welcome home :) I could feel the panic though when you thought Target was missing!

We always do the "who are you" look if Mum has been gone for longer that 5 years - now girls don't exaggerate!!
Luv Hannah and Lucy xx xx

boy, howdy! yer humans are lucky you gave 'em such a nice welcome. we hide for a long time, an' then only come out to offer the back of disdain (until the unpackin' begins, an' then we HAVE to take up our snoopervisory duties).

I always avoid my human for about ten minutes to thirty minutes when she returns. I do not want her to think I like her.

It is good to have a welcoming committee when you get back home.

Oh gosh, I bet they were SO HAPPY to have you home.

We can't believe Au, Target and Guido didn't stowaway in your suitcases and go with you!

Au, Target and Guido, we know you missed your pawrents when they went away! At least you didn't have to go to cattery like our friend Mr. Puddy did!! We are happy they are back home now.
Buster, Rudy, and Sam

We know they were overjoyed to have you both back......judging by how they are checking out those suitcases, they may be planning to stow away next time!

Usually when we are away even for a weekend, our cats are very offended and ignore us for a few hours !
I had to smile when I read you were away for 3 days in Thailand, it would almost take me 3 days to get there, lol !

Hope you had a good trip even with that bad scare. That must have been a sinking feeling but glad he came back. Silly cat. Hope you have a great day.

My cats sit and watch for daddy to come home from work everyday. They post up 1/2 hour from when he walks up to the door. So cute.

We don't like to be left alone either.... I am glad everything is back to normal! Happy Valentine’s Day, my friends! Enjoy!

Aww, they sure miss you lots...and showing it!

YOu three are dearly loved and that makes mom and I both furry happies. xoxoxo Happy Valentine's Day all 5 of you. Huggles.

How nice to be greeted so enthusiastically when you got home! :)

It's always nerve-wracking wondering if you'll be in a cat's good books when you've left them for any length of time. I think you got away with it on this occasion - just!

I can see there was a lot of thing´s to inspect in youré humans luggage :)

so hard to fully enjoy when one is away from the kitties.

we give our mama the cold shoulder, but buster couldn't follow through.

Glad you're home and not suffering the displays of displeasure. We've always been fortunate enough to be able to take Maddie (and Ivy, when she was with us) along. Not sure how Maddie would do on her own for a while....no plans to find out, either.

Welcome back home. Sending Valentine's wishes from my house to yours.

Aw, that kitty love is something else! Those three are adorable! Glad you had such a welcoming reception back!

Oh and Happy Valentine's Day everyone!

It's always a wonderful part of returning from a trip to be greeted warmly by the cats. I feel guilty leaving Luna when I go away, but love her excitement when I get back and we're reunited.

I wonder where Target was hiding! Must have been a good hiding place! I would have gone into cardiac arrest too!

Oh they missed you so much!! It must have been the longest five minutes between the news about Target's disappearance and reappearance. Glad everyone is ok. And it is the best feeling to come back home to see them, isn't it? Sounds like they are making sure their fur is all over you:-)

We are glad that he turned up!! xoxo Chloe and LadyBug Cute Cats!!

They are such aware animals.My Lola goes crazy when she sees a suitcase. We pay a cat sitter $15 a day while we are away but despite the wonderful attention and care she receives, she wants no part of it. We have to sneak out. Welcome home. I hope you had a great trip. Blessings...Mary

Oh, Target! Wat a scary you gave all of us!

Our cats can ignore us for hours after we return from a trip away! SO glad yours did not.