Guido Is Growing Up 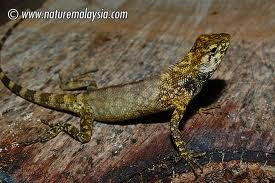 On Saturday I was woken just after 5AM by a high pitched scream. Stumbling downstairs, I saw Guido had brought in a bat.  Luckily he turned to me and said a polite, "Meow" at which the bat flew into the indoor garden.

It was unharmed so we let it find it's way back outside. 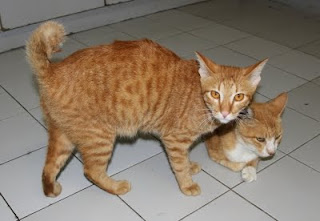 Yesterday Guido brought in a common fence lizard (thanks Nature Malaysia for helping me identify it!) Again, it was unharmed. Guido has the gentle mouth of a Labrador.

Au was dancing with excitement.  He wanted to keep it as a pet, but I took it outside and put it in a nearby field.

The lizard was only about 30 cm long from the tip of his nose to the end of his tail but the ungrateful little slink tried to bite me and he had a good go at clawing me too. Luckily I had him firmly wrapped in a serviette so he did no harm.

After these incidents I went to talk to Guido. As long as he does no harm it's OK but if he does start killing, he'll have to wear a collar and a bell.

When I went to tell him so, he was sitting on the kitchen floor, kissing a hugely disappointed Au. He gave me a look that said, "Traitor" and the words died on my lips.
Posted by Ellen Whyte at 9:35 AM

Poor Au:) Thunder says he would have been glad to help with that lizard although Mom says he hasn't a clue what it could do to him.

You guys have the coolest critters to play with! Too bad you didn't get to keep them.

guido would have been a good pest controller

I think I'd have freaked out with a lizard and a bat in the house. I'm not so good with those kind of things. Glad that Guido was gentle!

There is nothing like us cats and our prey!
Kisses
Nellie

Sounds like Guido has been very "hunting" busy!
Kisses and hugs
Lorenza

My goodness, what a hunter he is!

The cat before me had a collar and bell... and she still killed everything she could get her agile little paws on! Plus she would lose the collar on a regular basis - my human kept extras unhand so whenever she showed up collarless, my human had a new one to immediately slip on her.

The Adventures of Scarlett and Melly said...

That's some very impressive hunting! I like that the prey is mostly unscathed, too. Scarlett and Melly are opposite ends of the spectrum: Scarlett can't hunt to save her life, and Melly likes to dismember bugs.

Mum makes KC wear a bell. Don't know why; she is hopeless. She once brought a sparrow into the house (sadly deceased) but I think it was already dead when she found it... I do like the sound of your indoor garden... would that mean I didn't have to go outside to errr, well... you know....?!! Deccy x

Awwwww Charlie has to wear the bell cos he does go for anything that moves and many a time you will hear me shrieking as I try to rescue bird/mouse/bird... LOL! Yay for rescuing the lizard and the bat - both wonderful creatures!

Beautiful Guido and adorable Au!! You two are such handsome boys!! And Target too of course! Yay! Take care
x

Love that second pic, such an expression!

Oh my, bat! I would scream. Haha. But what a gentleman Guido is not to harm these creatures. When I was little, we had girl cats and one of them brought a mole to home. It was the only time I saw real mole..
Have a fun day friends!

That IS quite a look!
The 5AM scream awakening--not so cool, Guido!

Guido is certainly growing up to be a good hunter!

What a great hunter! Guido is AWESOME!

Wow, you really have good hunters and so special critters ! My cats only bring me mousies especially Rosie the mousekiller, this morning she had put again a dead mouse in Pookie's bowl !
Pookie didn't appreciate !

Guido is definitely growing up. And so many fun critters there to play with.

Wow you have some great things to chase. I have to put up with bugs..Mum would not have liked the bat though... Hugs GJ xx

Eeeeeeeekk, a bat and a lizzard. Boy I am glad I don't have those things at my house. You two certainly are great hunters.

You do have quite the hunter! Way to go Guido :-) If my kitty ever brought in a bat or a lizard I don't think I would be brave enough to gather them up. A lot of action goes on over at your house!

I wish we had such cool animals to catch in Sweden too !
Sorry that your mom didn´t let you at least keep the Lizard as a pet :(

Guido, you have pawesome hunting skills!

I have never even seen a lizard before.

A lizard AND a bat?! Guido, you are a mighty hunter!

I'm sorry but that lizard looks pretty scary to my Mom. If she saw me bring in that she would SCREAM!!

That was nice of Guido to bring you such awesome gifts!

Yep, the Human is saying she would have been a bit skeered in that there situation...Guido is a good Mancat.

I bet he was so proud of his discoveries!

Hi, Great post! Would you please consider adding a link to my website on your page. Please email me back.

Guido, you remind me of my Grande Dame..Robin Carole..she was a tiny Tortie lady (5 1/2 pounds) and an excellent hunter. She too brought in her contributins largely unharmed...but not always. xoxoxo