That sick cat in our road who was attacked by some fiend in human form isn't doing so well.  He looked a bit off on Saturday but ate his food with gusto.  Then yesterday evening he decided he wasn't hungry.  It was the same deal this morning.

I have been giving him food with medicine provided by the vet on the basis of a photograph of his wound because at first I couldn't get near the cat.  It took me 2 weeks to get him to come within reach of me.

In the last week he was letting me come close to him and touch his uninjured side.  He was getting better too.  The wound was clean, healing and the kitty was putting on weight visibly.

Now suddenly he's taking a bad turn and ironically he is now sitting under a car *just* out of reach.  I just tried to catch him with the help of a neighbour but we had no luck.

I have this terrible feeling that this cat is not going to make it.  I hope this is a temporary setback but my second thoughts are already busy with second guessing myself:

If I had scooped him up last week when he looked as if he was on the mend, would a visit to the vet have helped?  I didn't do it because I thought being boxed up, driven away and handled by people might undo all the good of the weeks before. I worried he might make the injury worse during the trip and refuse to come near me and his medicated food afterwards.

It's no good worrying because there's not much I can do except for hope and try again to reach him later.  But it is depressing. I really thought this cat was going to make it.  Please purr for him. 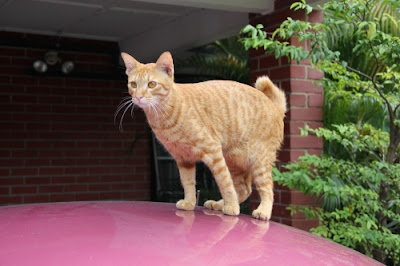 I wont show you a picture of the cat as the wound makes for upsetting viewing.  Instead, to cheer you all up (and me!) here's a picture of Guido doing his best Cat On Guard Duty impression.
Posted by Ellen Whyte at 11:13 AM

Email ThisBlogThis!Share to TwitterShare to FacebookShare to Pinterest
Labels: guido

We do love that photo of Guido and we hope that things turn around for the kitty.

Obviously you care what happens to this kitty. We hope he makes it, but whatever happens, you've been doing what you thought best, so please don't second guess yourself.

I am sending lots of purrs that kitty's way. I wish there was a way you could trap him and take him to the vet. If the wound got infected somehow, the only way to take care of it would be at the clinic.

How sad ! I would feel the same ! Hopefully he will make it and let you help him.

Poor kitty. We hope he does pull through - sending lots of good healing vibes.
That is a cute picture of Guido, though.

We're sending our best Good Greyhound Vibes to the little fella. It's tough, but at least there are good people like you that have given him a chance. Deccy x

We're sending this poor sweetie lots of purrs and purrayers. Whatever happens, please don't second guess yourself--we all can do that, and it's a waste of time and energy. You did what you felt was best at the time, and any other decision might not have made any difference at all.

At least he's getting love and care from you, perhaps more than he's ever had in his life.

Oh we know exactly what you are going through. I have a couple of cats here that are feral and I can't catch them and feel terrible because I probably can't get them to the vet. It is really a hard decision on what is best, go the vet and have the cat freak out or not. It is really really hard.So we are sending purrs and purrs so that maybe the kitty will get better. Take care.

Heartbreaking. Sounds like he knows how vulnerable he is and that is why he is hiding. Is animal control any help? Possibly a humane trap? Keep doing what you are doing. All fingers crossed that he realizes he can trust you.

Poor kitty. :-( I'm just glad you are there for him. He is not alone - even if this is his final hours, he is loved.

You have done your best for the injured cat - we will purr for him and hope he lets you reach him.
Luv Hannah and Lucy xx xx

Never second guess, you were doing what your heart told you to do. We are sending purrs too.

Yikes, it is hard to see an animal suffer. They are so innocent and love us so unconditionally. I hope that somehow the poor guy pulls through.

We are sending purrs and prayers for the kitty to make it. You made the best decision of not taking him to the vet at that time. He is so lucky to have you caring for him.

don't second guess yourself, everything you do comes from a good place and you do more than most would

Guido is hilarious, he looks so proud

second guessing is human nature, and hindsight is usually 20/20 and rose colored.. You did what you thought was best for the kitty at the time with the knowledge you had. Even if you had scooped him up and brought him to the vet, there is a darn good chance that the vet might not have seen anything either - especially since you said he was getting better..

I hope that he improves or allows you to help more (ok well both really, no or about that)

I have been so irregular with my blogging I didn't know about the injured cat. I really do hope he makes it. I hope the human suffers abuse. What is wrong with people!!

We are sending get well wishes and purrs for him.

Poor sweetheart. I so am purring that he makes it through and I know you have done your best for him and still will. Lets hope it is a minor setback and that he will begin to feel better again.Hugs GJ xx

Poor kitty - we hope he will be OK. Please don't second guess yourself when you did so much to try to help.

I'm so sorry to hear about the poor stray kitty. You've done everything you could and we pray he still makes it. Don't second guess yourself. You're right - being boxed up and taken to a vet would probably have upset him very much. Sending prayers and lots of purrs,
Cindy, Buster, Rudy and Sam

We are purring for the stray kitty and we know you are doing everything you can to help him. It's difficult when they are afraid of humans.

That is awful! Some peoples is just - nasty! Me would hates to deal with them, they probably treats everyone badly. Me will purray for your injured stray.
Thanks for the shot of Guido! That made me happy!
Kisses
Nellie

Sending many purrs for your stray cat - I know how hard it is to try to help a cat like that. Which is worse - all the stress of being trapped and carted to a vet or trying to help the way you are. I have often just put meds in food and hoped for the best - sometimes that is all you can do.

We're purring our loudest for that kitty to make it through some how. Hang on in there, sweet kitty!!!

You are such a kind soul.I hope your stray makes it. I'll be thinking of you. Have a wonderful day. Blessings...Mary

We're sending lots of healing purrs to that kitty.

Thank you very much for the purrs and prayers. EJ's mom's surgery went well and is recovering.

Oh, you are sweet to care for this kitty. We will purr for him to turn the corner and get better. Don't second guess yourself. You're just doing what you hope and feel it right in your heart.
xo Glogirly & Katie

We're sending our very best purrs and prayers. Thank you for caring for that kitty.

I'm sending purrs, prayers and lots of love for that kitty!
Luna - We love LUNA

You are are good woman. It shows in all that you do for both your cats and for others. Thank you. (((HUGS)))

God bless you for helping....that kitty is in our thoughts and prayers....

I'm so sorry for your heartache. Don't give up on him yet - we're all sending powerful thoughts of love and healing your way. Thank you for putting yourself out there to help this little one. I do hope this story has a happy ending.

Aunty E,
It is not an easy decision to make but sometimes we just have to accept things as they are. We are sending our purrrayers for the wounded kitty. Perhaps he will pull through. purrr....meow!

you are doing the best you can for the stray cat.

Oh, so sorry! many purrs... Thanks for helping this sad kitty.