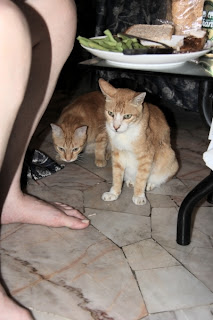 I've been meaning to make some changes and June 2012 is where they start.

First, I'm going back to school.  Next month I go back to my roots and will build on my very ancient psychology degree by training as a hypnotherapist.

In 1 year I hope to have an International Diploma in Clinical Hypnosis and to be practicing in the fields of building self-confidence and lifestyle changes like changing your diet and quitting smoking.  (I've done both in the last year, so that's a start!) In 2 years time I want to have a Practitioners Diploma and be specialised in helping rape and incest victims. 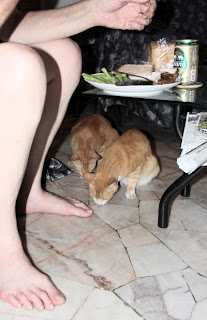 At the same time, I'm keeping up the usual work routine by writing my regular newspaper columns and magazine articles but I also plan to expand by publishing some Katz Tales ebooks.  Now I've had some time to explore ebooks with iPad, I think I know what's needed.  I hope to have 3 books out by end July.  I'm not sure how self-publishing will work in terms of payoff but I think I'm ready to have a go.

And of course I shall have to be at the beck and call of the fuzzies, so it's going to be a busy time.


In terms of this blog, it means I will have to cut back on my commenting.  Some of you may have noticed that I have been commenting less in the last few months.  I do visit about 60 blogs every week but now I only take time to comment on those whose writers leave comments on my blog.  Yup, it's mean but I have limited time.

And to finish, these pics show what dinner time is like here.  I made T-man some Dutch butter-fried pork with nutmeg and French beans but he had to share with those shameless beggars Au and Target.  Guido was out for a walk but he got a treat when he returned.

After years of effortless cat discipline in our house, all rules are now shot!
Posted by Ellen Whyte at 1:29 PM 29 comments

I went home to Spain to see my mum and my brother (working in Saudi) joined us too.  It was GREAT!  Blue skies, clean air, CLEAN STREETS WITH PAVEMENTS!!! and lots of culture as I tottered around old Madrid with Fay, my friend for over 20 years who is now one of the top travel operators in the country. (She runs MTZ with her pal Isabel, you should check it out)

Sorting out my 1000 plus photos and will bore you with them over the next few weeks.

Au, Target and Guido stayed home with T-man.  They had roast roast chicken every day, and enjoyed a real boy's fortnight but I think they missed me because I am under constant observation.  Every time I get up, there's a guard cat on my tail. T-man keeps kissing me too :-)

Au is lying at my feet with his tail laid along my ankle.  Target is sticking to me like glue.  He's so happy to see me that he wakens me up every 10 minutes at night to give me purry furry headbutts. Guido threw himself at my feet in an ecstasy of purrs when he saw me and this morning he presented me with a live cockroach.

More good news from my lovely neighbour Umi is that Jigsaw is getting better.  I'll see him tomorrow or the next day.

So while I get myself sorted out, here are some quick pics:


Will update you on the kitties and my plans for the Katz Tales blog on Wednesday.  Cheers, Ellen!

PS Look what came out while I was away: The White Ghost or what it's like to be white in Asia.  Read it at The Star for free.
Posted by Ellen Whyte at 11:14 AM 22 comments

Guido: Me And My Lizard

You should know that I am a furry good Hunter.

I gave my Pets a Live Bat on their anniversary and I shower them with House Lizards and other gifts every week.

I always deliver my presents live because Treats Are Better When Fresh.

While my Pets always thank me properly, they have a strange habit of Releasing my gifts. 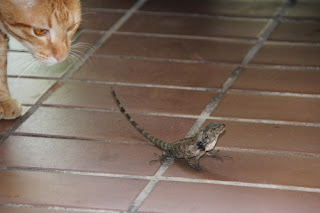 I don't mind really because afterwards they give me Treats.  And I can catch the same things over and over again!

Now the other day I tried something new.

Instead of chasing the Big Lizard that lives in our garden and bringing him inside, I just escorted him to the door and Meowed for my female Pet. 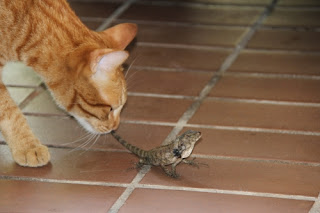 She came out and when I posed for pictures she smiled.  Then I went inside and ate Treats, leaving the Lizard to go back to the grass.

There's a lesson in this:

Lizards =  Treats!  And they don't need to be delivered directly to the Pets!

I shall build up a collection of Lizard Friends so that I will never be short of something tasty. And you can take that anyway you like! 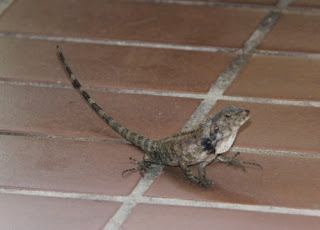 PS If you want to see our secret thoughts, just hover over the Pictures with your Mouse.
Posted by Ellen Whyte at 11:48 AM 31 comments 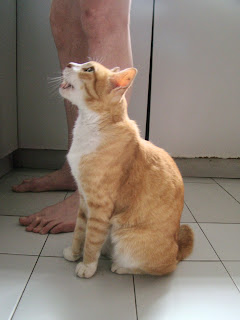 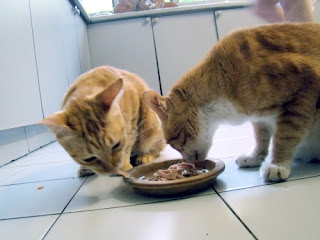 Saturday is Wet Market Day when I go to see what's interesting at our local market.  The cats enjoy this day because it means they get fresh roast chicken for lunch!

Every Saturday runs in exactly the same way as the one before it.

Au will start shouting, "Is it ready yet?" as soon as the chicken goes into the oven.

While T-man carves, Au stands by his side and meows loudly.  He is a firm believer in that the more you meow, the faster you get lunch.

And when it's ready Target will push his face into Au's bowl as he's too impatient to wait for his own bowl to be filled.

Guido will hang back and eat later in the day.  He's not a lunching cat; Guido is a breakfast kitty.

What are you eating today? Wishing all you cat and dogs out there a whole roast chicken!

PS to see our secret thoughts, run your mouse over the images.

PPS We're going to be on and offline over the next 10 days or so.  Bear with us please! All Will Be Revealed 1st June!
Posted by Ellen Whyte at 12:04 PM 21 comments

I saw a woolen rug the other day and thought, "Now that's something a cat would love!" and so I bought it for the three furry faces.

When I put it on the floor, Guido decided it was the world's biggest cat treat and tried to eat it.(Hey, we snuck an idea from Alfie and Milo so if you roll your mouse over the pics, you can see what we're thinking) 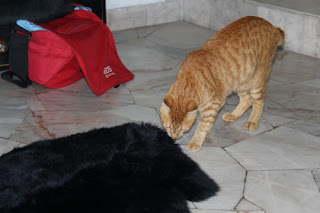 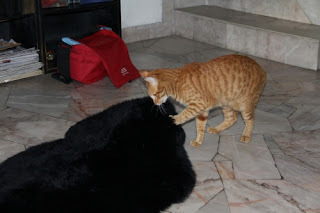 My little fur brain Target promptly imitated Guido and pulled silly faces because he didn't like the taste of the wool. 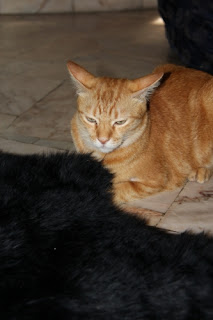 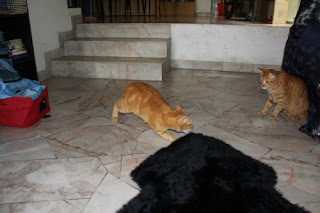 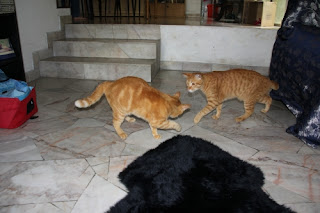 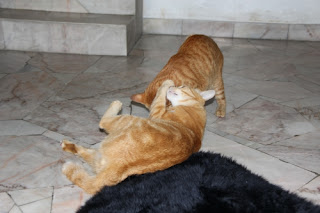 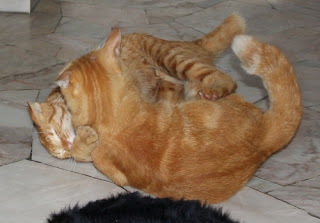 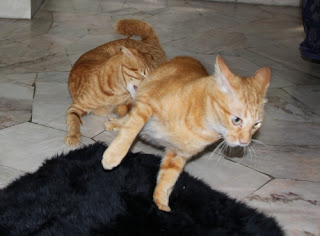 Both cats refused to step on the rug.  They thought it was weird.

Then Au came in.  He sniffed it over, rolled onto it with a sigh, and went into a happy trance.

To please all the cats, we've put the usual rug back in its place and we've moved the new rug to T-man's office.  It lies underneath his desk so he can wriggle his toes in it, and it's also one of Au's favourite nap places.

As for the sick kitty... Since Rosie/Ross had his operation, he's had to be restitched once.  Then, this Saturday morning the stitches looked bad again.  Our vet was away so my neighbour Umi suggested we went to her vet.  He knocked Rosie/Ross out, cleaned the wound and applied a special bandage that will soak up the damage.

I was wondering if we're making a mistake trying to save this cat because Rosie/Ross is feral and so frightened to be in that cage that I worry we might be cruel rather than kind. However, it seems terrible to put down such a young cat.

After a long discussion, the vet tranquilised him so he wasn't so scared, and he's in a big cage covered with a towel so he feels more at peace.  We're giving him and the bandage a chance to work.  The damage done to this cat was massive.  If the damage is too great, we may still have to put him down.  I hope not, but I worry.

Anyway, I went to see him this morning. Rosie/Ross was looking a tiny bit better.  We'll see what happens.  Please purr for him!  By the way, I've given up on Rosie/Ross and am calling him Jigsaw as we have had to stitch him together 3 times now.
Posted by Ellen Whyte at 4:48 PM 37 comments

We replaced the kitchen tap and the cats decided they had to inspect.