Rosie Ross Jigsaw Is Getting Better

I saw the sick kitty, now renamed Rosie Ross Jigsaw, yesterday and I’m delighted to report that he’s almost better. The 6 inch wide open wound is now a paltry 1 inch across. He’ll never have fur on his side again, but the skin has grown in thick and nice – a bit like a Sphinx cat!

You know that I was worried not just about his three operations that didn’t seem to be working too well but also about his state of mind. Our feral cat was so scared that I worried about his overall health. I wondered if we were being cruel while trying to cure him.

Anyway, as I had to go away, our neighbours very generously took over care of the kitty. Just as well because I think it would have bankrupted me! Anyway, they reported he was calming down and getting to the point again where he could be touched.

So when I went yesterday, Mani, the vet’s assistant, was delighted to tell me he can now touch Rosie Ross Jigsaw’s head and squizzle him a little. I told him that I didn’t think Rosie Ross Jigsaw would let me do that ever again, and Mani demurred.

So this is what happened: I walked in and said, “Hey kitten cat,” at which point Rosie Ross Jigsaw yelled, “It’s you!” and turned to Mani hissing, “That’s HER! That’s the bitch who saw me after I was attacked and lured me into a false sense of security with food and when I let her get near me, she TRAPPED ME! And took me for OPERATIONS! She’s evil incarnate!” 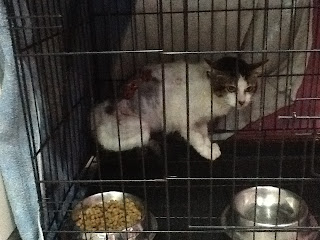 And Mani was shushing him but Rosie Ross Jigsaw yelled, “If she comes near me I will give her THE CLAW! I swear I will!”

So I dropped off the gourmet cat food I’d brought and quietly left.

I don’t care what Rosie Ross Jigsaw thinks because he is definitely going to be A-OK!

And as he’s now looking quite respectable, here’s a very shady pic of him, growling at me...
Posted by Ellen Whyte at 12:09 PM

Email ThisBlogThis!Share to TwitterShare to FacebookShare to Pinterest
Labels: Rosie

We are glad that he is doing better.

poor kitteh. The person that did that to him cause him such a fright till he got so traumatized.

Rosie Ross Jigsaw is not exactly the most grateful kitty ever, is he? I am very glad he is better, though!

Oh my Rosie Ross!!!
Maybe he still mad. but we tink someday he will realise and thank u for your help & kindness!!
he he he

It's just as well we don't help them for the thanks isn't it? Hehe!

I know in his heart he thanks you, as do we. It's so kind of you to look after this fellow.

Poor thing is so scared but we know deep inside he thank you for your help. Purrs!

Ellen, don't worry, he could just unfamiliar with you ... perhaps later on, he will learn to forgive and thank you :)

Awwwww beautiful Rosie Ross Jigsaw!!! Thank you for such a great job with looking after him! Awwww he may be growly and hissy but deep down he says thank you with all his heart and soul! Take care
x

We are so happy Rosie Ross Jigsaw (he got all the names :-) ) is getting better!! And how nice now he has calmed down. Hopefully he will become friendly around you some day... He may not be thankful for you now, but we definitely are. We admire all your care and effort to help him. He is a very lucky kitty to be found by you!

Glad he's doing better and hopefully he'll come around to give you a warm welcome!

Oh, my! Love your take on what he was saying to/about you--and it's probably pretty close to kitty truth. LOL.

But whether he appreciates it or not, you've done a wonderful thing by taking such good care of him. That has to count in the universal scheme of things, at least. :-)

We feel sure that Rosie Ross will be thankful that you have done him a big kindness when he is feelingless scared.
Luv Hannah and Lucy xx xx

it's good to hear that Rosie is getting better. hopefully he'll appreciate your kind gestures someday.

Hello Katz!!!! Saw your link on kika's blog and descided to visit and thank you for the nice words!

We're glad he's getting better although he has an odd way of showing how grateful he is! :) We're grateful you helped him too!

Oh he knows you helped him, he just hasn't learned to say thank you yet!

We're glad Rosie Ross is doing better. We hope he learns to thank you someday.

Oh-oh....
But sure is great to know he is doing much better!
Take care
Kisses and hugs
Lorenza

Rosie Ross Jigsaw? Thats a mouthful. No wonder the chap is stressed. Give him time, he'll come around. purrr....meow!

I just love you!
you have a wonderful sense of humor combined with so much heart

Siren shouts and hisses at me still, after all these years
at least the biting stopped after 6 months

Me is happy that Rosie Ross Jigsaw is getting better! Me was wondering iof me had missed becuase me has not been around, Me hopes your Mommy downloads some iPad games for yous guys,
Kisses
Nellie

We're so sorry he doesn't understand that you were truly his saving grace, but we're glad his future is getting much better.