Target jumped up on the bench yesterday afternoon and immediately puffed up like a blowfish. I went out to rescue him from whatever was scaring him, and guess what I saw? 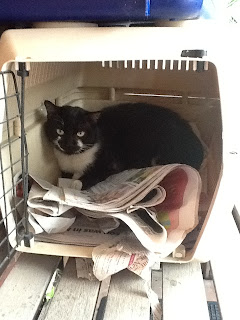 Coal the Tuxie Cat sitting in our cat carrier!  Remember Coal, the most expensive tuxie on the street?  He lives across the road from us now.

However, Tuxie isn't at his home during daytime at the moment as his mum and dad are working on the front of the house. He avoids the construction chaos by coming to our house to play and to hang out.

Guido often sleeps in this carrier, and as they are friends, I guess Tuxie thought Guido wouldn't mind.

Target likes Tuxie too, but he's a scaredy cat who gets a fright if anything unusual happens - like a leaf falling on the ground without 2 weeks advance notice.

Once he realised who it was, our little furbrain was fine.  But the second Tuxie went home, Target went to sit in the carrier - just to show it is his, I think!

Coal has a good spot to "hide" out, we suppose, though frankly, we avoid the PTU even though both are kept out all the time.

Our human laughed at this: "...he's a scaredy cat who gets a fright if anything unusual happens - like a leaf falling on the ground without 2 weeks advance notice."

I am impressed how they all get along still. Xxoo

Coal is very wise to find a safe hidey spot!

Target sounds like Faith! She is also jittery and jumps at the slightest noise.

Glad to know that Coal is doing great. You guys are wonderful!

cole has become such a good looking cat

What a beautiful cat. But sitting in a PTU??

::cracking up over two week's notice::

Target must be related to our Felix!

I bet Target will be more protective of these spaces now. Tuxie is cute!

For all you folks and animals reading this my blog has stories and information helpful for cat helpers everywhere. Pass it on to your human ‘beans!
I pray that all cat blogosphere kitties stay happy and healthy!
Debby in Arizona

We don't guess it was an intruder if you knew who it was. MOL

Even if Target likes Coal, I bet he still made the carrier smell funny!

Hello Coal! Good to see him again looking so well. Target is so funny - he sounds as much a martyr to his nerves as Charlie is! :O)

Oh wow!! Awwwwww gorgeous Coal is so lovely!! I clicked back on how he was rescued and the difference with his pic then and now! Awwwww!

That's what we'd have done too Target - got to get it smelling just right.
Luv Hannah and Lucy xx xx

Oh that's a very pleasant visitor! But maybe next time, if Coal vwants to visit, he needs to make 3 weeks advance notice:-) Target is so cute. We all know that's your carrier:-)

that was pretty nervy of Coal! lol

Awww, that's such a sweet story! It's nice to have friendly neighbors, and good that Tuxie kitteh has a safe place to escape the ::shudder:: "construction"!

That's so nice that they all get along so well. :)

LOL! We love Target's attitude and action in showing that the carrier belongs to him!

Hi Target, I agree. It's good to have nice neighbors but thank goodness, they go to their own home too.

Glad you didn't blow up from a food allergy. And really glad that the other kittie is not at your place but next door.

That is a scary sight - a kitty voluntarily going into a PTU! Our tails poofed up just at the thought of it!

Hmmm, I wonder how Tuxie got that name. Ha!

That was neighborly of Target to lend a space for Coal even without the notice. And then of course it was impawtant to establish this as your space after the visit

Well, yeah... gotta stake your terrority. And put your own scent back on it.

it's nice that he has a place to come when he wants to get away from all the noise and construction.

My cats can't stand noise. They made a huge hole in the box spring and whenever their is work going on in our house that's where they hide.

Hi there Coal, you are a handsome boy. Must be hard on you to have to go to another home. Glad you all get along. Have a great day.

What a sweetie - very handsome. Hope things quiet down at his house soon.

Good to see that Coal is doing well. He must be feeling comfortable enough to go into another cat's carrier to rest :)

Glad Target has a new friend visiting him. He is going to be in trouble though when the leaves start to fall :-) Good for Target showing Tuxie who is boss!

Tuxie is gorgeous! He looks like a proper little gentleman cat!