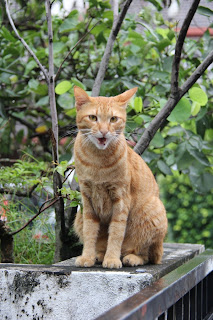 Guido is in a good mood.  He's been playing in the garden, hunting frogs in the drain. When he gets one, he puts his paw on it, waits until the frog hisses and then let's it go again.  I think it's the feline equivalent of playing with wind up cars.

He also woke me up to say, "Hi!" at one and six o'clock this morning.  And in case I missed it, he put his nose in my ear and said it again.  louder.

Our little Guido is a chatty cat and we love him dearly.  Even at one and six o'clock this morning.

At least he does not put his paw on you and wait for you to hiss!

Awwwww adorable Guido!!! How ya doing too?!?! We love that you love to chit chat and say hello and not just once but twice in the early morning! What a good kitty!! Yay! Take care
x

I think the poor frog wasn't hissing, it was inflating itself. Guido thinks frogs are toys.

We don't think your Mom will need an alarm clock with you about Guido!
Luv Hannah and Lucy xx xx

We've never played with froggies.... we miss all the good stuff!

What a cute boy he is! I like talkative guys!
Love his froggy game!

We think sweet Guido is a Handsome chatty cat. Hugs and nose kisses

Aw Guido is so adorable!! I love the cute face saying hi :-)
My Niko is very chatty, too and I don't mind being waken up in the midnight at all!

I love giving Dad a quick comment or 5 too!

Something's are the same all over the world!

Guido, you are a ravishing Ginger and I have a thing for them.

This is the Human: On Caturday morning, Spitty stick his big ole head right up into my face to wake me up--he NEVER does that! I guess he was hungry, MOL! Maybe Guido was too, but you just weren't getting the message, ha ha ha!

You look awfully handsome and charming there, Big Boy.

Guido, we love how you wake your mom! Julie licks the mom's ears and gives her goose bumps. Those frogs sound like lots of fun!

Pee S. Thanks for FBing us! What an honor! Purrs!

We can almost hear Guido in that photo :)

Good job waking your Mom, Guido! Moosey -- who is quite chatty, too -- does the same thing. :)

Is not froggies fun! Me loves to chase the tree frogs we has! and both me and Kozmo takes turns waking the pawrents up with our talking in the night. Daddy calls us Chatty Cathys! Keeps up the great work!
Kisses
Nellie

Great photo and what a great place to check out on everything going on in the garden. Nothing will get by you.

He sure is lucky. Jan isn't the least bit happy with us when we get chatty in the middle of the night.