It's been about 36C or 38C for over a week now. And as it's humid in Malaysia, we're sweltering.

Target and Guido run riot in the early morning when it's a cool 25C and by nine o'clock, they come in, settle in their fave fan spot and do this: 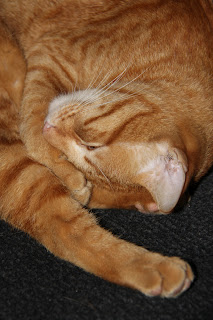 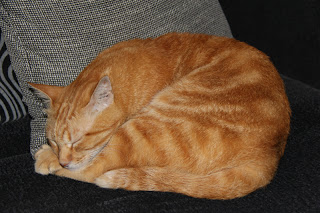 I'm thinking of joining them!

BTW, I've removed all my books from Amazon. If you want a Storm Chase novel, please go to Smashwords, Kobo, BarnesandNoble or other store.

When Micah accidentally kills a drug dealer, and Bryony is the only witness, Micah decides to keep an eye on her while he makes plans to leave the country. However, when Micah and Bryony start talking, things don't work out quite as either of them expect. Lost Weekend is a love story with a hint of murder and a heroine who decides she likes it best when she's on top.

We think Target and Guido have the right idea!

They are so sweet. It gets sweltering here in mid-June through late September.

Yikes! That is some serious hot you have there. Guido and Target's strategy looks good to us, too!

It is a hot week for us in penang too! The Purrrrs are hiding themselves under the couch and some of them lazying infront of out bath door.

Wow, that hot AND humid?! It must be really oppressive. We're in the 90s but dry and it is still too hot!

Why did you take your books off Amazon? My human wants to know because she too is a micropublisher and she figures you must have a good reason.

This message was sent to Sparkle,


I can't work my author profile properly. My books don't appear on my author profile page, and when someone buys one of my books, the suggestion for another read comes from an author I don't even know. Customer service says that's because I'm in Malaysia, so I don't get the same deal as authors do in the US and UK.

I've had people saying they can't find my books, even when they search for it using the Kindle id number.

On top of that, they won't pay into my bank account unless I have over 100US$ in every particular country. They send a cheque, and charge a handling fee, on top of the 30% tax they say they pay "on my behalf". I wanted them to pay into my mum's account instead as she still lives in Europe, and they won't do that either.

I think Amazon discriminate against authors who don't live in the US or UK and I'm fed up with them.

I'm also having a bad time with a UK indie online publisher who won't take my book (under another name) off their shelves!

The kitties sure know the best way to keep cool! Mica Minnie Moo is all excited about a top side heroine named Micah! She tries desperately to be top cat but she's a real coward at heart.

We kitties don't like our monsoon, either! Although our humidity only gets up to 40% or so...at 117F it's HOT!

Everyone's been sleeping on the tiled floor nowadays....yeay for aircond!

Sheesh! And I complain when it gets to 80 Fahrenheit! You poor furry things--how do you stand it?!?!?! You needs your own purrsonal air conditioners!

Poor kitties, they must be exhausted in that heat! My silly ones cool down by sitting in the bathroom, esp when the shower floor is wet. Mini-Me even sits in the sink.

I'm terribly behind with my blog reading and commenting. I've just been outside and mum is thinking I might need my fleece on for my walk. Seriously. In May. Deccy x

That 38C is too hot to wear fur coats in.
Luv Hannah and Lucy xx xx

For being so hot you look so darn cool! Have a happy week everyone!

OH MY COD! How hot is THAT?

Do you books also come in paper rather than ebooks?

Oh my, 36 to 38c! It s hard when hot and humid at the same time! I hope you stay cool. It's been nicely cool in the morning and hot during day here. I am hoping it stays like this for long time.
Have a great week!!

My Mom HATES "hot" Keep it there please! Love, Cody

It's hot here too! The chihuahuas love the high temps, the cats not so much.
It looks like Guido and Target are resting peacefully.

We are so sorry you have all that heat. The humidity makes it so much worse we don't like humidity. Stay as cool as you can and we hope you get a break in the heat soon. Hugs and nose kisses

OMC! 38C is hot! Hope you have plenty of fans and A/C!
Purrs

Whoa, that is hot! It's nice and cool here.

Phu , so hot weather you have !
Here in southwest Sweden we have only + 15C.
XOXO

Hot! We was hot here too (well high 20s to Mid 30s which is unusual - we don't get that heat until July)
Then TODAY - Frigid - we went only to 19! Mommy is going to looks for the new book!
Kisses
Nellie
PS Don't miss my birthday pawty today (May 15th. Me is having a comment-a-thon1
Kisses
Nellie

Wow, that is quite hot. I personally love hot weather, though I'm sure Luna agrees with me.

BTW, to answer your question, Luna is 8 1/2 now. We will be celebrating her 8th Gotcha Day in June :)

I'm kind of envious about the weather there, here it's Spring time but it keeps awful, raining a lot with cold temperatures. :( I miss my sunbaths!
Anyway, good hint to you all, in hot days nothing better than a good nap!
Enjoy!
purrs and love
Luna - WE LOVE LUNA and hugs from mom Léia

38C... I know how hot that is. I almost had a heat stroke. Momma was so worried and immediately called the vet to ask what to do. I had a cold bath and that solved the problem. Now i have cold baths at least once a week.

naps, that's what you do when it's hot hot hot. you boys are very smart.

send the weather over here we could do with some warmth,xx Speedy

Sending cool breezes to you - can you feel them?

Send some heat over here. It is just starting to be spring weather her in PA USA

We know! It's horribly hot! Still hot when it pours! Our human gives us baths and fan to cool us but can manage only one a day.

So what happened to Long John? Ahrrrrr...!