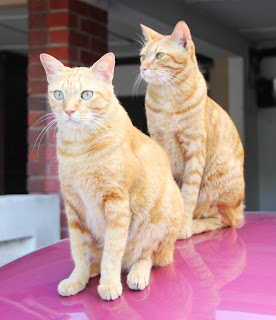 We've had an exciting week.  First, we have new neighbours.  Target and Guido watched with horror as they revealed a large dog.  A Doberman.  Guido snuck back into the house when he saw it, but Target sat on the roof of the Beetle and gave it hard stares. It worked, because the dog appears to be friendly and quiet.

Then our friend Happy from across the street managed to open a window and go on walkabout. He's an indoor cat so we were all worried about him.  We all searched the streets, looking for him.  An agonising 16 hours later, he came home, safe and sound. Guido and Target had Feline Greenies to celebrate.

Then our taps ran dry.  We haven't figured out yet precisely why, but it seems a rogue factory up country messed up the rivers. The cats were fine, but the humans a bit whiffy.

After three days, our taps began to run again, but it also rained.  Actually, it poured. Our street flooded, our doormat floated away, and we were a half centimeter away from having a flood in the living room. Guido and Target sat on the sofa, watching the rising water cover the garden and run up to the house. We were all relieved when the rain stopped just in time.

Today everything seems to be all right.  The cats are sitting on the roof of the Beetle, watching out for dogs, storms, and floods. They're also preening quietly because our neighbours next door and across the road keep walking past and saying, "Hello, sayangs!  Aren't you handsome cats?"

Yeah, they are!  And we're all hoping we have a nice, quiet week.

YIKES! You've had a very interesting (and scary) week!

What a week. I do not think I would like a big dog. I like to chase little ones...

We bet you're glad that week is over!

Holy Cod--stinky Humans? Why they don't clean themSELVES is beyond us.

Wow, I bet Target and Guido are glad this week is over!

Wow you have quite an exciting week! Doberman looks scary but glad it seems to be friendly woofie :-) And glad Happy came home safely!
We had pouring rain yesterday, too. I hope it'll be sunny today. I wish you a nice quiet week!

OH MY! A DOGGIE and of the scary kind!

You have all had a very hard time. I hope more normal times are there now and that the dog will remain polite but boys, please don't go there.

Oh my stars!! What a week!! Such excitement! Oh dear! We are so glad you are all ok and have plumbing again and no flooding please! Phew!! More treats for everyone there! Take care
x

Not cool! What a stressful week! Hope Happy got some of those Greenies too.

Good grief - you certainly had a horrible week with everything going wrong. Happy Labor Day.

Wow. That was a bit much for one week!

wow a bit hairy for a bit wasn't it,xx Speedy and Rachel

Oh my goodness, what a week, but at least all is well.

OMC !
What a week you had !
Glad that the water is back on so your humans dont have to smell whiffy any more :)

That was quite a week! Thankfully all ended well, and with some Greenies too! Glad the big dog was friendly, that could have been a real nightmare (although my mom had a kitty that chased German Shephards, but she was a tortie.)

Whoa! What a week! Let's hope for something a bit more quiet and relaxing (and under control) for the next one, huh? Purrs...

We hope this week is calmer for you.
Luv Hannah and Lucy xx xx

wow what a week!Glad that is a friendly Dobie! Also glad the kitty came home safe and sound!
xoxo

with all those things happening in one week to you kitties, you both deserve a week-long nap.

Lots of excitement going on! Target and Guido look so intense. I'm so glad you didn't get flooded. What a stress week for everyone.

That was a hectic week! I am glad the new neighbour dog is friendly.

We know it has been some time but we did want to tell you how very much we appreciate all the kinds words of compassion you left us for over the loss of our dearly beloved Abby. We are humbled by all the support and love we received and there is no way we can tell you how much it meant to us.

Wow that's a lot of rain. We're glad that everything worked out well for you. We'd have been very worried.

Oh, my goodness!! We are hoping for you all to have some peace, quiet and enjoyable, well-deserved time. Hugs and nose kisses

Yikes. That was some week you had, kitties! Glad everything worked out in the end, though. :)

Glad you weathered the week's challenges and Happy is safely home. Hope it's much more quiet and relaxed around your house now!
xxoo
Maggie

My no water
Dad is glad we have a well. It takes the odd whap with a wrench but...
You are some good looking cats are you not